Claire Strader, farmer-about-town, brings organic agriculture into the heart of the city 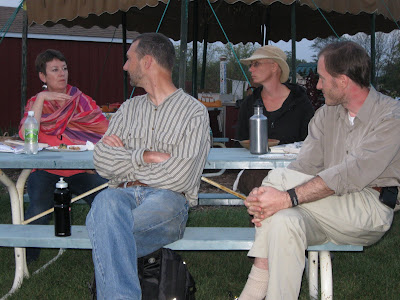 Urban vegetable gardens are tucked away in backyards everywhere. But an entire certified organic working farm right in town? That’s a lush surprise.

Welcome to Community GroundWorks at Troy Gardens, a 31-acre site on Madison’s Northside. The five-acre farm produces “well over a hundred varieties of fifty different vegetables,” says farm manager Claire Strader. The farm is just one program among many in this unique organization. “There’s no other development in the entire country that combines farming with community gardening, with prairie and woodland nature restoration, with kids’ gardening, and all the educational programming that’s part of each of those areas, with housing,” Claire says.

It was 2001 when Claire rolled up her sleeves, worked with volunteers to clear the land, and planted “some squash, potatoes and tomatoes.” Today the farm generates about $100,000 annually through sales of sprouts and herbs at local groceries, a farm stand that operates Thursdays May through October 4 p.m. – 6 p.m. on the 500 block of Troy Drive, and CSA (Community-Supported Agriculture) shares, whereby members receive a weekly box of bounty throughout the harvest season. All 120 shares for 2009 have been sold out since early spring.

Claire gained national attention earlier this year when a farming couple in Illinois launched a competition for nominees for the position of “White House Farmer,” in the hopes that the administration would respond to urgings from the sustainable agriculture movement to till up at least a bit of the 18 acres of manicured lawn surrounding the presidential manse. Out of more than 56,000 votes cast for 111 candidates, nearly one in five went to Claire. She won handily.

VVK: What does your victory mean to you?

CS: It was very exciting while it was happening. I think it’s not so much about me as about this community. In south central Wisconsin, we’re tuned into, we care about the local agriculture movement. When this idea was put in front of people, they got in touch with their friends around the country, around the world, and said, vote for this person – she grows food here. Will Allen [of Growing Power Inc.], who came in fourth place, he’s from Milwaukee.

CS: The whitehousefarm.com group is still working on a packet to send the administration. The Obamas have put a garden in, but I haven’t heard anything about a farm or a farmer.

VVK: How did you get into farming?

CS: I started out studying biology and genetics, then switched to philosophy and women’s studies. I wanted to think more carefully about how I exist in the world – building shelter, making clothes, growing food. I thought the best way to learn would be to go work for an organic farmer. I worked for a farm run by man and his wife the summer I graduated from Wellesley. He was great. I loved working for him.

VVK: What brought you to Wisconsin?

CS: I sought out a farm run by women. I wanted to learn everything – to run the Rototiller, to fix things – regardless of my gender. I found Luna Circle, which was then in Gays Mills, and was there four years. We built a straw bale house, dug a well, lived off the grid. Later I went to UC-Santa Cruz for an apprenticeship in ecological horticulture and learned new things, beekeeping, orcharding. I decided that I wanted to work for a nonprofit, to do farming and education. I sent applications all over the country, and wound up becoming Troy Garden’s first employee.

VVK: It seems unusual, traditionally, for a woman to be a farmer.

CS: One of the things we learn in women’s studies is that agriculture across the world, historically, has been the domain of women when it’s on a small scale. For their own use, or for small-scale selling. I feel like women are a natural fit in this world of small-scale agricultural production, with organics and sustainable agriculture. Men not excluded – there are plenty of men here and across the world involved in it.

VVK: I noticed that women were the top three vote-getters – 40% of all votes cast – in the competition for White House Farmer nominees.

CS: For me, that does fit in. Also, none of us are traditional family farmers who own a farm. We’re all associated with education and broader mission statements. For me that makes sense as well.

VVK: How is the farm, and your job as a farmer, influenced by being part of Community GroundWorks at Troy Gardens?

CS: I’m not just the farmer, I’m also project coordinator. In the winter my job changes and becomes more internal to our organization -- writing grants, raising money. It’s hard for family farmers to devote a lot of time to education. Fewer farmers are offering internship programs; more are just hiring employees. Because of the nonprofit, we have the opportunity to do that. I really like training future farmers.

VVK: How is the current economic climate affecting the organization?

CS: Our programs are very strong, like the Kids’ Garden, things people see. It’s much harder for us to raise money for the salaries, the administration. This is true generally for nonprofits, but these days that piece of our organization is being much harder hit.

VVK: What’s the most challenging part of your job?

CS: Worrying constantly about the financial stability of the organization as a whole. We rely on individual contributions. It’s a lot lot of work to get the word out and solicit contributions, especially right now, for obvious reasons. I work really hard, and it’s tough to worry about financial things on top of all that.

VVK: Do you live nearby?

CS: I’m about a mile from the farm. I have a garden at home.

VVK: What! You farm all day, and then you garden when you get home?

CS: My partner, Sarah, pushed for it. We really like having food outside our back door. We have about 12 fruit trees and 40 asparagus plants. I’m experimenting with strawberries and raspberries. We’re ripping out the front yard for more dry beans. We’re committed to not buying any vegetables. Sarah is a woodworker and our next project is to build a solar food dehydrator for leeks, tomatoes, broccoli, all kinds of things.

CS: Carrots. They’re delicious, they store well, you can get lots of different colors, you can eat them raw or cooked. And they’re not easy to grow. They’re difficult to germinate, and it’s not easy to give them what they need to get that shape. I like that I keep learning.

VVK: How about the toughest crop?

CS: Corn is really hard for me. I have a lot of luck with popcorn, but sweet corn...! There are insect pests that are very difficult to deal with. I keep trying.

VVK: What projects are you working on now at the farm?

CS: We’re raising money for a passive solar greenhouse. We’re partnering with the UW for their first hands-on organic agriculture class ever at our land-grant university; students will work at the farm. We have lots of applications for our intern positions, including people who want to come back for another year, people from Michigan and Illinois, and even an applicant from France.

It’s a small farm in the scope of things. I’m honored and proud that there are so many people who hear about it and want to be involved.