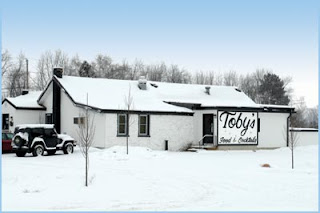 By Vesna Vuynovich Kovach
In Brava magazine, March 2007
Column: Around the Table

What’s a supper club? If you have to ask, you’re probably not from around here – and here’s what you need to know. No, supper clubs don’t have memberships (just like night clubs). No, they’re not open for lunch – they’re not called “lunch clubs,” now, are they? And if you want to look like an old hand at supper clubbing, head straight to the bar to order your meal. You’ll be seated when your salad comes out.

Supper clubs were born during the Prohibition Era, when alcohol was forbidden by an amendment to the U.S. Constitution. That’s right, for 13 long years sipping a beer was a federal offense. Not a popular law in Wisconsin. Soon, resourceful citizens throughout the state had opened out-of-the-way establishments along clandestine – er, peaceful – wooded roads, cleverly labeling them “supper clubs.” In those days, “club” evoked a respectable gathering spot for gentlefolk; just the opposite of the wicked connotation of “saloon” or “bar.” And supper sounded like a legitimate reason to go out. Thus was born a culinary tradition that still thrives throughout the region.

Toby’s Supper Club, on Dutch Mill Road near the intersection of Stoughton Road and the Beltline, which evolved into a supper club through the 1930s and ’40s, is a vibrant example of the form, serving authentic supper club eats alongside cocktails so classic they were in fashion when the old fashioned was a new fashion. (In fact, that happens to be Toby’s number one mixed drink.) This is no retro-chic retread: Toby’s is the real thing.

Sisters Roxanne Peterson and Rhonda Frank run the club, which has been in their family since the late 1960’s. We talked with owner Roxanne about Toby’s yesterday and today.

VVK: How and when did Toby’s Supper Club get started?

RP: In 1933 [the final year of Prohibition] Harden Davis and his wife, Iva, built a barber shop here. The rumors were that bootleg booze was sold out of this barber shop – Toby’s kitchen today. In 1939, an addition was made to the building and the barber chair was moved out into a quarter of the dinning room. I have a customer who lived across the street and remembers having french fries and getting his hair cut by Harden.

In 1940, it was sold to Lester and Ruth Galvin and made into more of a restaurant. In 1945, three couples – Weedpohl, Dohaney and Curtis – made it into a supper club and named it Toby’s. In 1950, Toby and Lila Curtis became the sole owners.

VVK: What was Dutch Mill Corners like in days past?

RP: It was Madison’s entertainment center! At that corner there was Simon’s Log Cabin, where the Park and Ride is now. Jack Simon was known as a bootlegger in Prohibition time. I remember riding my bike with my mom and sisters to have lunch during the day, and we had many dinners there. There was the Beacon, where Arby’s is now – a bar and dance hall owned by George Dunn. My dad frequented it in the 50s.

On the other side of 12 and 18 was Oren Rimes’ Supper Club, later known as Nate’s, then Baker’s Dutch Mill. Further down 12 and 18 were Charlie’s Bar and Noble’s Supper Club. There was also a bar called the Cat and the Fiddle, and the Old Dutch Mill.

VVK: How did your family come to acquire Toby’s? 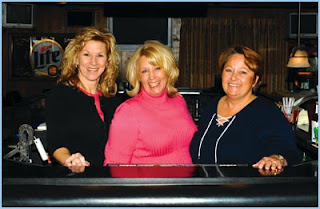 RP: In 1956, my parents built a home around the corner. I still remember my first dinner at Toby’s. It was my fourth birthday. I had the shrimp and a kiddie cocktail, and I thought they were both awful! I love the shrimp now. I remember that my dad painted Toby Curtis’s car, and when he would come to see my dad he would always bring us candy. In 1960, Toby passed away. Lila ran the business until 1969, when my parents bought it. Lila worked with my parents the first year and passed away in 1971.

In 1972, my dad made an addition to the building. When he knocked down a wall to make the new addition, inside we found newspapers with headlines of Prohibition being lifted, Ringling Brothers Circus posters, two sealed, full, Prohibition gin bottles and an original Toby’s menu. The perch plate was 35 cents. – 75 cents for the dinner. A T-bone steak was 65 cents and shrimp was $1.35 Lobster was $1.75.

VVK: Did you always plan to make Toby’s your career?

RP: I went to school to be a nurse so that I wouldn’t have to work at the restaurant the rest of my life. But now I’m the owner! I also work as an R.N. at Meriter Hospital, and at the Lasting Skin Solutions clinic I do aesthetic procedures – lasers, dermal fillers, Botox procedures. Between these two jobs I probably work 50 hours a week. I’d have a hard time choosing which job I like the best. Nursing is very rewarding for me, as is working at the restaurant. People tell me I work too hard, and I say I work a lot but I have never worked hard. The day that I work hard is the day that I don’t like what I do.

I started washing dishes at the age of 11 when my mother worked at the restaurant. I never thought that I would still be here 42 years later. After my parents purchased Toby’s, I eventually moved up the ladder to waitress. When my parents divorced in 1972, I became the manager. At that time I was married with two children and had just completed my L.P.N. degree at MATC and was starting a new job at Madison General Hospital, which is now Meriter. In 1976 I went back to school at UW Madison for my B.S. in nursing.

VVK: What other family members work at Toby’s?

RP: Rhonda’s worked at the restaurant for the last 37 years. We’ve never had an argument. She says it’s because I‘m the boss, and I say it’s because we’re a great team and we’re great friends.

VVK: How has the boom in chain restaurants affected your business?

RP: We offer an old-fashioned, nostalgic atmosphere that the new franchises cannot reproduce. At Toby’s we have never advertised. We’ve relied on word of mouth. I credit my dad for telling me a long time ago, “Don’t worry about what the competition is doing. Just take care of your own business and you’ll be fine.” We’re seeing the generation of adults coming to Toby’s because they had dinner here as a child. They’re now bringing their children.

VVK: How about the smoking ban?

RP: We’ve lost a few good friends and customers because they can’t smoke inside. But customers comment how much they love the smoke-free environment. We’ve been very fortunate that the smoking ban has not affected our business overall.

VVK: With all the fads in dining over the past few decades, how has Toby’s menu changed over the years?

RP: Thirty-eight years ago, we added pork chops, frog’s legs, and cod to the menu. We’ve added some appetizers, a New York Strip on Saturdays, and Rhonda’s Wednesday night special, which is different every week.

RP: No. We use the same dressing recipes and food preparations handed down from the original owners. To this day we use the same cast iron skillets that have always been at Toby’s for hash browns. The same cast iron skillets for pan-fried chicken. We got a new grill and stove in 1996. At that time our cook Margaret remembered when Toby got his first new stove in 1956. She had cooked on that stove for 40 years, and continued to cook on the new stove for another four years. She passed away at the age of 72.

VVK: How about trends in cocktails?

The most popular mixed drink that we make is the old fashioned. In more recent days martinis and Manhattans have become more popular again. Tony is known for his famous key lime pie martini. He will not give out the recipe, not even to me. Toby’s offers a large variety of beer. In 1969 our biggest selling beers were Budweiser and Pabst. In 1972, when Miller Lite came out, it became our number one selling beer and remains so to this day.

RP: We’ve maintained our quality and consistency in preparation of food. When people come to Toby’s they get what they expect and what they remember. They’re recognized by our staff. The same staff is always there. One Friday night, a couple had come in, who Rhonda had waited on for years. When they walked in the door they’d see Rhonda and nod at her, and she’d put in their order. On this particular Friday night, Rhonda wasn’t there. Tony and I asked if they’d put their order in – it appeared that they’d been waiting a long time. They replied that they weren’t sure what to do because Rhonda wasn’t there. They didn’t know how to put their order in. “Rhonda always knows what we want,” they said.

VVK: It sounds like you have a really solid community of loyal customers!

RP: We have people that have been coming to Toby’s since the 40’s. Last summer, some customers told me they were there for the 50th anniversary of their first date. One of our oldest customers, Charlie, passed away in 2006 at the age of 98. He was actively coming to dinner at Toby’s with friends. His wife, Lou Lou, lives at Skaalen nursing home and is 102 years old.
Posted by Vesna VK at 9:31 PM No comments: 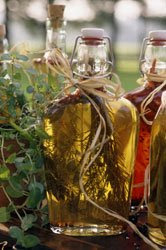 Recipe from Around the Table: Toby's Supper Club
By Vesna Vuynovich Kovach
In Brava magazine, March 2007

At first, Roxanne was reluctant to reveal any of the recipes that have been Toby’s secrets for over half a century. When I told her that folks these days think salad dressing is something you buy from a big company at the supermarket, she agreed to share this recipe, a favorite at the club. It’s basic; it’s just right; it’s honest American home cookery. Good stuff. “People bring in their own jars for us to fill,” says Roxanne. “I make this by the gallon. I’ll scale it down for your readers.”

Combine all ingredients in a blender pitcher. Blend. Keep refrigerated. Makes one quart.
Posted by Vesna VK at 9:00 PM No comments: