Eating in Madison A to Z

Blogger reviewers Nichole Fromm and JonMichael Rasmus are crunching through the alphabet
By Vesna Vuynovich Kovach
In Brava Magazine
Column: Around the Table
October 2008 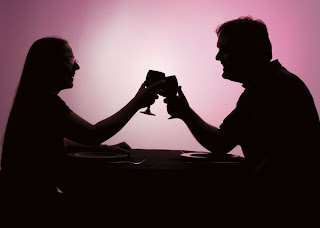 So a mathematician and a librarian walk into a restaurant, and one says to the other.... No, wait, they’re not at the restaurant. They’re trying to figure out where to go out to eat and they can’t decide. OK. So the mathematician says, “Let’s eat in every single restaurant in town in alphabetical order.” The librarian goes, “I’ll mind the alphabet, but you track the statistics.”

Oh, right, and it’s the twenty-first century. So they blog it.

The punch line is Eating in Madison A to Z (www.madisonatoz.com), the “dining diary” through which married couple JonMichael “JM” Rasmus and Nichole Fromm –paraphrased above – have been chronicling their meals out since their first entry, A8 China, in May 2004.

As of this writing, they’re early in the Ms (Main Depot, Maharani, Maharaja, Madtowne Fried Chicken....). But even through they’re still years away from Zuzu’s, their site, which accepts no advertising, is becoming one of the top resources for restaurant info locally – in a town with one of the most restaurants per capita in the U.S..

Fresh, personable and articulate, with just the right sprinkling of humor, the A to Z entries are fun to read, and the discussions that follow in the comments are likewise engaging. Like potato chips, it’s hard to stop at just one review. You can browse alphabetically, or by the letter grades Nichole and JM have assigned (A–F, and Honor Roll) – or even by Coke vs. Pepsi service. And, as Nichole explains, “Many times restaurants don't have a good online presence so our posts are frequently at the top of the Google search results. We get about 300 visitors per day with half coming from such searches.”

VVK: How do your professions inform your approach to the Madison A to Z project?

NF: Librarianship is more and more about navigating and inhabiting the online world, so being a librarian has been useful for me getting the techie side of things going. It also helps my writing in that it comes naturally to me to be as comprehensive as I can, source my info properly, admit lacunae in my knowledge and fill gaps when necessary.

JM is great at maintaining our lists, compiling fun statistics about grades and costs, and figuring tips. He works at the Wisconsin Lottery, where he calculates odds statements and analyzes sales data.

VVK: Do you ever eat out of order, and then just adjust the posting date so that the blog stays tidy?

NF: Oh no! We never, ever eat out of order for the blog.

VVK: How often do you eat out?

NF: About six to eight times per month for the project. We rarely eat "off list."

VVK: Do you spend more money eating out now than you used to?

NF: We go to some high-end places we wouldn't have been able to justify before. But for every white tablecloth dinner there are dozens of coffee shops, which brings the average cost per plate to $10 or so. Very doable when you take into account that this is our primary spendy recreation – replacing movies, bars, Franklin Mint chess sets, etc.

VVK: How would you describe your philosophies of food?

I live to eat, and JM eats to live. I seek out new things whenever possible. JM is much more utilitarian. The food-as-fuel approach. These were sticking points at the start of our marriage but now they're counterpoints.

VVK: I notice you give out more As, fewer Bs, and more Cs than JM.

NF: Interesting! I wasn't even aware of my weird U-shaped grade curve. JM hypothesizes that maybe that since I feel more strongly about food, I'm more likely to give high marks to that which I enjoy and low marks to that which I don't, whereas he's more a middle of the road, bell-curve kind of guy.

VVK: Who does what for the blog?

NF: We tag-team. We both take the photos. I usually write the first draft, then JM punches it up with the funny, and I copyedit. I curate our Flickr photo stream and the Google map of where we've been, and do most of the site maintenance. JM watches our statistics and minds the comments.

VVK: Which reviews get the most attention?

NF: The negative reviews, unfortunately. But it's true that they're more fun to write and more fun to read. We try to avoid cheap shots but sometimes can't resist.

VVK: What kinds of comments do you like and dislike?

NF: I love hearing about other peoples' positive experiences. Since we only go to a place once, we can't really be balanced. So it's great if another diner can point out a house specialty, or maybe

clarify something we wrote. It's all part of what we hope is becoming a community, a place for people to talk about food.

Spam and troll-droppings are our least favorite comments. Trolls are commenters who set out to be rude and ruin the online conversation. Off-topic, off-color insults are rare but they happen sometimes.

VVK: How has your approach to reviewing evolved over the four years you've been at this project?

I like to think we've gotten better at describing the food such that readers get a vicarious experience. Reading some of our earlier stuff where we basically say, “It was good,” makes me cringe.

VVK: Which reviews are you most proud of?

I like the ones where we go beyond merely talking about the food, as with Bean Sprouts. [The review included commentary on the ethics and implications of sneaking vegetables into children’s meals.] Whenever we can get a laugh, that also makes us happy.

VVK: Have your standards and expectations changed?

NF: Our standards (such as they are) have crept up, perhaps, but we try to evaluate a place on its own terms, according to what it's trying to do. That's why a little diner like Cottage Cafe can win our hearts as easily as a special-occasion place like Harvest.

VVK: Some restaurants you've reviewed have closed since you reviewed them on Madison A to Z.

We think we might have a curse - some of our very favorite places have closed. R.I.P. Allie B’s, Bull’s BBQ, China Palace, Cleveland's, Francois’, Fyfe’s, Gaston’s, Jada’s and Luckenbooth.

Some locations are just deadly. Good luck to the new taqueria coming in where Donut Delight, Mediterranean Delight and Bamboo Hut have all come and gone.

VVK: What's been your most unusual eat-out experience so far?

NF: ChinMi in Verona stands out as the most surreal: a truck stop family restaurant plus sushi, where you have to walk through a convenience store to get to the dining room.

VVK: So far, what's your favorite restaurant in Madison?

NF: At Bradbury’s I love how focused the menu is. They just do crepes and espresso drinks and they do them very, very well. Ma-Cha has a quiet, meditative atmosphere where you can really slow down and enjoy time alone or with friends. And Kennedy Manor feels like a secret time warp. Upscale yet hospitable, there are regulars around but new folks are treated well, and the food is classic but not stodgy. The whole place has an aura from the 1920s and the food really rewards the trip.

VVK: What about when new spots open in earlier letters of the alphabet?

NF: If we did not go back [between letters] for the make-up letters, we would reach the end of the project and still have a ton of restaurants to visit, which would be a pretty big letdown. Plus, people want to hear the scoop on new restaurants.

NF: When we started this project the first place on the [Isthmus online restaurant database] was 24 Carrot Café. JM pointed out that would make calling [our site] "A to Z" inaccurate. "Zero to Z," while alliterative, is not quite as catchy. We debated, and ended up alphabetizing numbers as if they were written out, though this is contrary to library filing rules.

Another point of contention is initial articles like El, La and Le. I wish I'd thrown my librarian weight around and insisted that we refile the ones with initial articles (and put L'Etoile in the E's, for example). But the restaurants we eat at would not match the dining guide we use and that seems a little capricious when you've already committed yourself to eating in alphabetical order. Six or seven straight Mexican places when we got to "La" was a little much, though.
Posted by Vesna VK at 5:50 PM No comments:

Related article: Blogger reviewers Nichole Fromm and JonMichael Rasmus are crunching through the alphabet
In Brava Magazine
Column: Around the Table
October 2008

Says Nichole: “Beets seem to be popping up on more and more restaurant menus, which is great for anyone who loves the earthy, sweet gems. My mom gave me this quintessentially "Sconnie" [Wisconsonite] recipe. When her mother in Milwaukee put on a Sunday lunch spread, the beets would be on the relish tray alongside the ever-present ham, Kaiser rolls and potato salad. These refrigerator-pickled beets are also a great accompaniment to liverwurst and onion sandwiches. You can get fancier with this recipe by roasting the beets with rosemary or using tarragon or other spice-infused vinegar.”

Cut off the beet greens, leaving some of the stem. Wash beets, then wrap in a foil pouch or place in a covered baking dish. Roast at 400F for 30 to 40 minutes, until fork-tender. Let cool. Peel. Slice into bite-sized rounds. (Alternately, use drained, canned sliced beets and skip the roasting step.)

Place the bay leaf and cloves in a 1-quart glass jar with a lid, and put the beets on top of them.

Bring vinegar and sugar to a boil in saucepan, turn off heat, and stir just until sugar is dissolved. Pour vinegar and sugar into the jar and let cool a bit before putting on the lid. They are ready to serve once fully chilled, though the flavor will improve over time.

Keep refrigerated. These will last several weeks. Serve on their own, in salads, or as part of a classic relish tray with gherkins, olives, and crudites.
Posted by Vesna VK at 5:50 AM No comments: