The Education of Anne 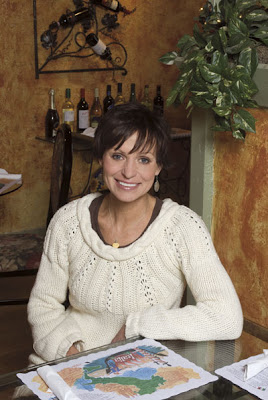 By Vesna Vuynovich Kovach
In Brava Magazine
February 2009
Column: Around the Table

“We are not just following a recipe. We are articulating a family heritage,” says Anne Nause, who does nearly all the from-scratch Sicilian cooking at her restaurant, Sole Sapori, on Mount Horeb’s Main Street, where “the core recipes come from family traditions.” She explains, “Food traditions [within] any culture are similar,” but “they take on the flavor personality of the people who create them. That’s what sets us apart.”

Anne cares so strongly about continuing the culinary legacy of this family that she left her lifelong career in education – with a Master’s in education, she had long been a school principal and was working at a central office level, pursuing certification as a director of curriculum when she bought the restaurant in 2003 – to devote her professional life to this cause.

But what makes this all the more unusual is that, in the case of this particular German-Norwegian native of Sheboygan, the family in question is not her own.

VVK: How did you first get involved with the restaurant?

AN: My youngest daughter, Maddy, was waitressing for the Vitales [Sam and Celina Vitale, who founded Sole e Sapori, its previous name, in the 1980s]. She was a gymnast and needed a sub for her shift. She couldn’t find anyone to work for her, so she asked me if I could do it. Since I had never waitressed I was a bit apprehensive. I went with her one night and she showed me around before my big debut. All went well and I was surprised to have people actually give me cash! What a riot – all you have to do is give them food and you get cash. I was hooked. I subbed for her all through her gymnastics season and even picked up my own shift when another waitress quit.

VVK: To go from pinch-hitting and part-timing to switching careers – that’s quite a leap. How did it happen?

AN: I decided to become a restaurateur because I could see the potential in the restaurant and did not want it to close. It was that simple. Albeit capricious.

Celina frequently asked me if I would like to buy the restaurant, but I was passionate about staying in education. It wasn’t until many months later, after Celina and I became quite close, that I heard her speaking to her family in Sicily. Although I didn’t speak a lick of Italian, I knew she was planning to move back. I asked her [about it]. “Ya, ya,” she said, “I go.” I said, “What about the restaurant?” She replied, “I close.”

When you live in a small town it’s heartbreaking to see things close. [Back home] there had been a restaurant we used to frequent. When it changed hands the new owners changed the restaurant and it subsequently closed. I just didn’t want to see that happen in Mount Horeb.

AN: I asked Celina how long it would take me to learn everything. She said, “Two weeks. First week I cook, you watch. Second week you cook, I watch” Brushing her hands, she declared, “Done.” Sam and Celina are brilliant. They set up the recipes in a way that made it possible for one person to cook for the entire restaurant without skipping a beat. I would attribute the distinctive flavors of the core Sole recipes to a set of consistent ingredients. To say much more would be letting out the big secret of what is behind the sauces.

In my first week, I watched and took notes. It was literally hands on. That’s the measurement system we used: hands, spoons, “glugs,” some, a little. I was just relieved to find out [Celina and I] had the same size hands!

VVK: How is the Vitale way different from the cooking you knew before? How has your relationship with food transformed?

AN: In my life growing up, I was introduced to lavish-ingredient, multi-course cooking that would take a whole day to prepare. My mom and grandmother were incredible cooks and dinner was a major event while I was growing up. I used to think great food had to take forever to make, and if it didn’t come from James Beard or Julia Child it just wouldn’t be good enough.

I’ve always loved to cook, to eat and to interact with food in general. The Vitales introduced me to a whole new way of thinking. Now, I have a hard time following a recipe without translating it into something new. I can look at an ingredient, picture, or recipe and integrate it into something uniquely my own. Cooking is freeing and expressive.

VVK: Have you added your own touches to the menu?

AN: Some modifications and additions. Some were experiments that were so delicious we had to keep them on the menu. So far we have been very fortunate – our regulars are thrilled with the maintenance of the original recipes and excited about the addition of the new.

We make our own garlic crisp crackers for our homemade dips, all inventions of mine. A weekend special I make which people are clamoring to have added to the menu is a chicken sun-dried tomato and roasted garlic lasagna with béchamel sauce. Also just put together a clam and mussel dish – we call it Crostaceo alla Pomodoro – that’s fresh mussels and clams with chopped tomatoes in a spicy garlic wine sauce. It’s beautiful, with the clams and mussels in their shells. Today I’m experimenting with a panettone layer cake with almond paste and a light cherry flavoring in the cream layer. I just like to play around with food.

VVK: You’ve done a lot with the interior, too.

AN: I definitely wanted the rooms to stay rustic – no straight walls, lots of texture, rich colors for the front room. The back room is more of an indoor “garden room” – lots of windows, lots of plants. The second remodel added space that was formerly vacant, unheated, storage area. We made a small, private dining room with leather-like finish on the walls – dark and intimate, deep merlot with a dark brown frottage finish, with large, dark, wooden tables. We added a lounge with a fireplace and small bar. For the larger banquet room I wanted an Old New York speakeasy feel, cream, espresso, black and white.

VVK: How do you like being a business person?

AN: I think my enthusiasm and love of the place really does translate to the overall experience. How other people feel about the place – as long as I’m not losing money – is far more important to me than making piles of money and feeling like I’m taking a short cut. Five years ago Sole was predominantly a pizza and spaghetti carry-out business. Now most of our business is dine-in. It’s a place where couples go, where friends like to meet. I’ve even had a few proposals and one small wedding.

When the business was small, it was a piece of cake. It’s time to find someone who can take on some of the load. As it is, there is not a single moment in my awake time – unless you count showering – that I’m not working. Accounting, bills, remodeling, cook planning, party planning, ordering inventory, putting inventory away. I do 100% of the prep work: bread, meat sauce, marinara, tiramisu, specialty desserts, appetizers, pizza dough, and pizza sauce. Currently, I also do all the cooking. Name it, I do it. I’m looking for help, so if you know of anyone, call me.

VVK: What are the biggest difference between your old career and your new one? What do you miss?

AN: I was passionate about education, versus being excited about the restaurant. I miss the feeling that what I’m doing on a daily basis is needed and important to the world. I am glad to leave behind the feeling that I can never do enough to change the world for some children.

As a principal, you’re middle management and it can be frustrating. At the restaurant, it is mine. My ideas, my work, my success or failure. I like being able to have an idea and see it to fruition, or modify it as I see fit.

VVK What do you love most about what you do?

AN: When people go out of their way to tell us how delicious the food is. How surprised they are when they walk down the long hall and are transported to another place, another time and it’s both beautiful and delicious. I love to know that people really appreciate the handcrafted goodness that makes Sole unique.

Related article: The Education of Anne: How a school principal from Sheboygan learned to cook Sicilian – and run a restaurant


Here’s a single restaurant serving of one of the most popular dishes at Sole Sapori. “Shrimp, mushrooms, garlic and fresh tomatoes sauteed in olive oil and served with rigatoni on a bed of fresh spinach.” The shrimp is a quintessentially Sicilian ingredient, and the marinara is a Vitale hallmark. “This is a pure Vitale,” she says. But you’ll have to sub in your own favorite red sauce – Sole Sapori’s marinara is a family secret!

Heat a small sauté pan over medium-low heat. Add oil, capers and garlic. Sauté for a minute or two to meld the flavors. Increase heat to medium and add mushrooms, tomato and oregano. Cover and cook about 5–8 minutes, or until tomatoes and mushrooms are soft enough to chop with a flat-edge wooden spatula. Add marinara and stir.

Meanwhile, line your plate with a bed of fresh baby spinach. Place a serving of pasta atop spinach.

Just before you’re ready to serve, add shrimp and cook through until shrimp are pink and done, taking care not to overcook them. Top the pasta with the sauce. Finish with some freshly grated Pecorino Romano and a dusting of lemon pepper. Enjoy!