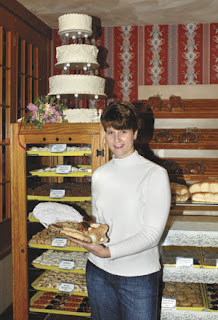 By Vesna Vuynovich Kovach
In Brava magazine, December 2006
Column: Around the Table

In 2004, re-opening the New Glarus Bakery was a dream come true for Angela Anderson, its new owner. But something was missing – something critical to restoring the true spirit of the old bakery.

It was the old notebook. Where was the New Glarus Bakery without it?

Filled with irreplaceable Old World recipes for breads and pastries, the book had passed down through the string of families who had owned the bakery since 1910. With its help, the sturdy ovens deep within the small-town storefront spent the twentieth century baking traditional Swiss and German staples and treats – pumpernickel rye loaves, potato bread, nut horns, springerli, honey stick cookies – for delighted townsfolk and tourists alike.

But during the brief tenure of the bakery’s most recent owner, the book had simply gathered dust in a desk drawer. Longtime recipes – and staff, too – were swept aside for a more modern, industrialized approach. That proved to be a losing strategy. Without dedicated artisans baking heritage goods from scratch, the small business sputtered and shut down.

Angela, an IT professional who had dreamt of one day owning the bakery ever since she’d worked there as a high school student in the early 1990s, now saw her chance to turn things around. Determined to revive the once-proud institution, she bought the business, then tracked down and rehired the previous crew. The shop was about to change hands; everything was coming together. But then the book disappeared.

What to do? The bakery had already failed once without its prized recipes. How could Angela succeed? The newly rehired bakers struggled to reconstruct the old recipes from memory. But the chance to completely restore the town’s beloved tradition – and it had seemed so certain – seemed to be lost forever.

Then came a call that changed everything. A computer whiz friend had deciphered the information on some old floppy diskettes Angela had found in the office.

It was the book! A previous owner, Harold Weber – with his wife, Nancy, he had run the shop for a quarter-century – had typed up every recipe. And a century of tradition narrowly escaped extinction.

Today Angela and the rest of the bakery’s skilled, enthusiastic staff supply the town, tourists and Internet shoppers from all over the nation with authentic, all-natural New Glarus Bakery goodies baked from scratch. “It’s my dream. I love it,” she says. “I wouldn’t trade it for anything in the world.”

Vesna Vuynovich Kovach: How did you get interested in baking, and in the New Glarus Bakery in particular?

Angela Anderson: When I was a child, I’d help my mother and grandmother bake. They would always make cookies, bars and cakes from scratch. I even remember rolling out cinnamon rolls one summer. My mother was always whipping up something in the kitchen.

During my junior year in high school, my sister-in-law, who had worked at the bakery, thought it would be a great idea for me to apply there. So I did. It was like becoming part of another family. We all worked very well together. Customers loved the New Glarus Bakery – for its products, service and cozy, warm feeling. People would drive miles, sometimes several states away to come here.

I realized early on that it was the made-from-scratch aspect as well as an image of high quality products served through many generations that made this bakery a strong, stable business as well as one of the focal points of New Glarus. Today, there are very few scratch bakeries. The ones I knew closed because the tradition in the family ran out.

VVK: The bakery went up for sale in 2001, after the Webers had owned it for some 25 years. Did you think about buying it then?

AA: I told my husband when we got married in 1997, “I have two goals in life: a house in the country, and to own the New Glarus Bakery.” He said, “Sure, whatever.” I knew someday the Webers would want to sell and the idea of having the bakery close just crushed me. But when it came up for sale in 2001, he didn’t want to move. We were living in Janesville and working in Beloit. He said it was either him or the bakery. I chose him. That time.

My mom bought me a little ceramic bakery. She said, “This is in remembrance of what your dream was.”

Then, in 2004, my mom brought me an article from the town paper. She told me, “I know your bakery dream is long gone. I don’t know if I should even show you this. But I thought you should know about it.” It said the New Glarus Bakery was going into foreclosure. I read it, and then I re-read it. I read that article for two days straight. I knew it was my one golden opportunity. I knew the next person to take it on wouldn't let it go. I couldn't bear the idea of non-traditional New Glarus Bakery products being made here, or worse, someone bringing in already-made products like at the grocery stores. It just wouldn't be right.

I wanted to see the bakery back to where it was when Howard and Nancy [Weber] had it. They continued to build an outstanding reputation for 25 years. I also saw what happened to the community when the bakery closed. It was a sad state.

Three weeks before the foreclosure sale, my husband told me to pick up divorce papers.

VVK: It sounds like you spent your adult life pining for the New Glarus Bakery. Why did you leave the area and go into a different field?

AA: I guess I went into information technology because at the time the IT field was a hot career. I also received my BS in business admin, and an Associate’s Degree in computer science. All my experience at the wheel plant, I call my boot camp for running a business. After about 5 years I had managed the systems that were the fundamentals of running the plant – production control, human resources systems, preventative maintenance systems, financial planning and accounting systems.

My closest friends knew I secretly wanted to have a business of my own – and that business was the bakery. I talked about it a lot. Business plans developed in my head over the years on how I would run it. I even planned out production schedules and devised sales figures based on the amount of items I remembered we would sell on a daily basis. 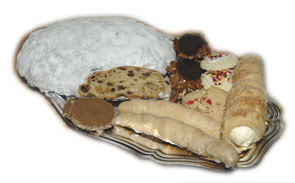 AA: We take light and dark raisins, and soak them in rum. There’s almonds and spices and a log of marzipan [almond paste] that runs down the center of the loaf. After they’re baked, we dip them in butter and roll them in powdered sugar. Then we shrink wrap them on a gold board and freeze them.

The freezing is an important part of the curing process It takes at least a month for the flavor to develop. We’ve eaten them right off the cooling shelves, but we just looked at each other and said, “This has no flavor!”

Last year we shipped 3,000 loaves all over the country, and Hawaii and Canada. This year we’re baking 960 – that’s 80 more than last year – for Byerly’s and Lunds, an upscale grocery chain in Minnesota.

VVK: Now that you’ve had the bakery for a while, what have you learned there?

AA: I have trained with mostly my bread maker in the traditions of making our hard-crusted breads, like you would find in Europe. I enjoy working with all my bakers and learning from them. Baking is definitely an art. You can throw somebody a recipe, but it’s the art, the skill, the creativity that you need to make a formula into something edible. It requires a sense of taste and above all, patience. It’s a work of art.
Posted by Vesna VK at 7:49 PM No comments:

Literally translated as “pepper nut,” these walnut-shaped treats are named after the Pfefferlanden – “Pepper Lands” – an old German nickname for the spice-rich Far East. “The dough is very thick and dark, and has a spicy taste of cloves, cinnamon and anise,” says bakery owner Angela Anderson, who generously shares here the bakery’s century-old recipe. “It’s difficult to compare the flavor to any other cookie. We only make these at Christmas time, and include them in our ethnic cookie sampler.”

In large mixing bowl, cream together shortening and sugar. Add eggs and spices. Combine corn syrup, molasses, water and baking soda. Add to creamed mixture. Using mixer, add 3 cups of the flour. Add the rest of the flour and mix by hand. The dough will be very stiff. Use your hands to shape round balls of dough into balls about the size of small walnuts. Place on greased baking sheet. Bake at 400° F for 6 to 8 minutes, until lightly brown. Dip cookies in melted butter and roll in powdered sugar. Yield: 300 cookies. These freeze well.
Posted by Vesna VK at 6:51 PM 5 comments: