This deceptively simple recipe is endlessly variable. That’s because local growers can supply you with scores of apple varieties to choose from, each with its own flavor profile and unique balance between tart and sweet. Some types are only available for a couple of weeks out of the year, so no matter how often you make it, it’s “great throughout the season. Easy and tasty,” says Vivian. “I often suggest combining two or three varieties of apples when making a pie or apple crisp,” she says, to get the fullest, most complex-tasting result.

Place apple slices in a buttered 8" x 8" glass baking dish. Mix together remaining ingredients and sprinkle over the apples. Bake at 375°F for 30 minutes. Enjoy. This recipe can easily be doubled in a larger baking pan.
Posted by Vesna VK at 6:09 PM No comments:

An apple a day 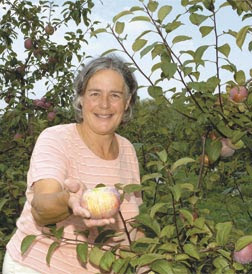 By Vesna Vuynovich Kovach
In ANEW Magazine, October 2006
Column: Around the Table


You can often find Vivian Green at the center of a crowd, enthralling eager shoppers with information about the wares that fill her farm market stall: apples. Lots and lots of kinds of apples, bins of fruit ranging from deep red to green to rosy pink. “We have more than 1700 trees with more than 65 varieties,” she says of Green’s Pleasant Springs Orchard, the farm she’s owned and operated with her husband, Dick, since 1977. And she can tell you what you want to know about every single kind.

“Gala is the most sweet,” she says, “Lodi is the most tart. It’s good for cooking. Braeburn is tart and sweet. Blushing is one of the Jonathan-Gold crosses. It’s hard and crisp, bitter tart, with a little sweetness. Mutsu is crisp and sweet.” Some, especially antique and heirloom varieties, taste better than they look. “Sheepnose is ugly, but it’s tasty and tart. Smokehouse is green with gray streaks – it looks terrible but it makes a great pie. Then there’s Spitzenburg, Thomas Jefferson’s favorite apple,” with a flavor that’s been compared to pineapple and a cinnamon aroma, sensational for out-of-hand eating. But its homely appearance – “orange with gray spots,” says Vivian – is probably why it’s fallen out of favor over the centuries.

VVK: How do you find apple varieties? How do you decide what to grow?

VG: We attend conferences, trade shows and field days sponsored by Wisconsin, Minnesota and Michigan fruit and vegetable growers. At these programs new varieties of apples are introduced. We can learn about the problems they have found growing them and taste them as well. We select from those that interest us and give them a trial. Our orchard is constantly changing with us trying out new varieties and removing older or less productive varieties.

We tried Granny Smith, but they ripened so late, it didn’t work out. Pink Lady is definitely out for Wisconsin, but breeders have come up with early-ripening Fujis, and we are growing a variety called "September Wonder" Fuji which ripens at the end of September.

I don't know if it’s global warming or what, but for the last several years, we’ve still been picking apples into November. Ten years ago that was not possible. As a result, we’re ripening late varieties like Braeburn and Goldrush now.

VVK: What are some of your favorite apples?

VG:. We like a balance between sweet and tart with a great crunch. Some favorites that fit these characteristics are Ginger Gold, Golden Supreme, Honeycrisp, Swiss Gourmet, Sonata, Suncrisp and Keepsake, to name just a few. Many varieties are all-purpose apples, both good to eat and also great for pies and sauce.

VVK: How do you control pests?

Having a chemistry background, I don’t want to use any more chemicals than I have to. Dick’s masters degree is in environmental education. When we began our orchard we looked into how

to grow apples in a way that was safe for the environment and also produce them economically. We use a program called Integrated Pest Management. We set pheromone traps, female sex hormones to attract the male insects. We then count the population and determine when the population is at a threshold and a spray is needed.

Insect scouting with a hand lens is ongoing from April to October. There are helpful insects. Lacewings eat aphids. Ladybugs – real ones! – are good. And some wasps are very helpful.

We also have a weather monitoring station. It measures degree days and wetness hours to help monitor fungus diseases. It’s the fungus that gets you. Insects are pretty controllable. But the fungus just doesn’t allow you to go chemical free.

VVK: You’ve been in the news lately for helping to found a new farmers’ market, the Westside Community Market, after you and some other longtime Hilldale Farmers’ Market vendors were turned away in 2005.

VG: Not returning to Hilldale after it had been our major market for 29 years was a shock. Our customers were disappointed and encouraged us to find an outlet for our apples on the West side of town. [The Greens, Madison Sourdough and JenEhr Family Farm] along with a community member began the Westside Community Market, Inc. It is a vendor-run market. Both vendors and the community came together to bring back the friendly, community gathering that the [Hilldale] market had once had. The Westside Community Market has easy, accessible parking and lots of friendly vendors with a wide variety of products. I am pleased to be the market manager this season.

VVK: You vend there and at the Dane County Farmers’ Market. Can people come straight to the farm?

VG: We have U-Pick of common varieties like McIntosh, Cortland, Gala, Jonathan and Macoun beginning mid-September. We give tours of our orchard beginning in early September through October. The walking tour includes education about growing apples and picking apples, seeing the varieties of apples in the orchard, and eating fresh, washed apples in addition to an indoor tour of washing/grading equipment and cider-making.

VVK: Can you tell me about your unpasteurized cider?

VG: We produce our unpasteurized cider in a state-of-the-art facility which we designed and installed in 2002. Each week we blend eight to 14 varieties of small, washed apples – it changes week to week as varieties change. I encourage persons concerned about pasteurization to simply heat the cider to boiling and then turn off the heat, chill and enjoy. You do lose some of the flavor, but only minimally.

VVK: Some farms that I’ve visited have no loose apples for sale – you can only buy a big sack of a single kind. I want to try them all, but I’m just not in the market for a truckload of apples!

VG: We allow our customers to select as few or as many as they want. We will not pre-bag apples.

VVK: With so many types of apples at the supermarket, why buy direct from the orchard?

VG: Our customers have found that apples purchased from apple growers are fresher, have greater variety, and have none of that wax [commercial apples are usually coated with shellac or a similar agent] to give the apples shine.

Out-of-state apples are picked too early – they have to withstand shipping and they don’t want them to be easily damaged. But they haven’t reached their full peak of flavor and moisture. You can’t let an apple be itself when it has to be shipped long distances and stored in walk-in coolers for months.

We pride ourselves in the quality of what we sell. We think an apple has to develop its complete flavor. If you really care about fruit, you’ll wait until the fruit is ready.


––––
Green’s Pleasant Springs Orchard, located at 2722 Williams Drive near Stoughton, can be reached at 873-4096. The Westside Community Market is held Saturdays at the Hill Farms DoT parking lot on Sheboygan Avenue and Wednesdays at the Westgate Mall parking lot on Segoe Avenue. The Greens' e-mail address: apples247@tds.net
Posted by Vesna VK at 8:04 PM 3 comments: