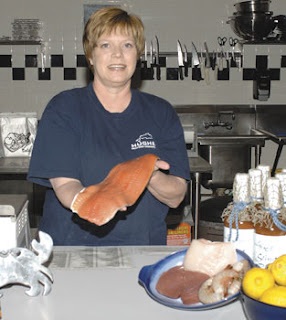 Once an at-home mom, Kathy Hughes has become president of a thriving business – and one of Madison’s foremost fishwives

When you’ve spent most of your adult life as an at-home mom, what do you do after your three children grow up and your husband retires? Do you (a) retire to the suburbs of Miami and learn to play canasta and shuffleboard, (b) weep over your better half’s lack of enthusiasm for all those household chores he now has time for or (c) co-found and preside over a bustling family enterprise that guarantees 12-hour workdays, incessant business phone calls during your off-hours — and all the halibut you care to eat?

For Kathy Hughes, president and co-owner of Hughes Seafood, the answer, to her surprise, was (c).

When her husband, Mike, retired as a lieutenant with the Madison Police Department, he took a job at a fish market because, says Kathy, “He couldn’t stand doing nothing.” Soon after, their son Josh became assistant manager at the Seafood Center located inside the Brennan’s Market on University Avenue. Then, came an unexpected offer that changed everything. When Seafood Center declined opening a new branch in the Brennan’s going up on Watts Road in early 2004, the Hugheses were invited to start their own seafood shop there.

Hughes Seafood was born, with Mike as vice-president and Josh as secretary of the new company. “We set it up that way at the beginning because our banker suggested it. That’s the joke in our family – they’re all working for me now,” says president Kathy, with her customary easygoing laugh. Business took off, and went to another level this summer with the opening of a second branch inside Brennan’s University Avenue location, the site of Josh’s old job. (The Seafood Center currently has locations in Brennan’s on Whitney Way and in Willy St. Coop.)

VVK: Did you ever see yourself in this sort of role?
KH: Never. I never thought I’d be doing this. We used to have a life. Now all we do is work. It’s a lot of hours. But most of it’s fun. The customers are my favorite part of it.

VVK: Have you always liked seafood?
KH: Yes. I love to smell like fish. I’m kidding! Cooking has always been my hobby, and I’ve cooked quite a bit of seafood in my life, so now it’s fun to be a little more creative with it. I love experimenting. I make all the spreads we sell: smoked salmon, crab, crabby cheddar. I come up with recipes to give out to customers. I want them to be happy with their purchases and come back for more. I do the book work and the ordering. I’m kind of always looking for new products to put on the shelf.

VVK: What’s the secret to your success?
KH: We never keep anything in our case over 72 hours, ever. We bring fish in six days a week, always in small quantities. We try to just bring in what we think we’ll need for that day. If our fish has any odor, it’s out the door. Our place never smells like fish. There’s no reason for that. You can tell when fish is fresh: you’ll never smell it. Fresh fish is all shiny — it doesn’t look tired, or separated and falling apart. Several people have told us they’ve gone back to eating seafood since we came along.

VVK: How do you know?
KH: You don’t. It’s a very difficult business, to be honest with you. The potential for waste is there. With the Badger games and the Packer games, you have to be very careful. We want to have something for people who are going to entertain. But once the Badgers play, there’s going to be no one in the store. None. If you figure 80,000 people go to a Badger game, that’s a lot of the people in the area.

VVK: I suppose you encourage customers to use their purchases right away.
KH: Definitely. Why would you want to buy ahead? People will tell us on Wednesday, we’re planning to prepare this on Sunday. No, no, no, no, no! You might as well buy frozen fish from any grocery store. Although we do have a gentleman who comes in every week and buys $100 worth of fish to freeze and use throughout the week. All these different types — a little less than a pound of each, just for him and his wife.

VVK: A lot of people are concerned about mercury in fish these days.
KH: Yes, it is safe to eat fish. The USDA says 12 oz. per week is OK, even for pregnant women. It depends on the variety. Cod, halibut, salmon, they’re fine. The big game type fish – swordfish, tuna – those are the type that you don’t want to eat an overabundance of. We do have people who eat nothing but fish. They vary what they eat. We also carry freshwater fish that come out of the Great Lakes: walleye, lake perch, whitefish. It’s all in the size of the fish.

VVK: Another concern is the environmental impact that fishing is having worldwide.
KH: With new regulations going into place, I think prospects are good. Most of this is so well regulated, because the fishermen themselves don’t want to lose their livelihoods. For instance, there was a big deal about Chilean sea bass recently. That’s a certified fish that now is sustainable. We’ve found that it’s all tagged and run through the USDA. They’re taking bigger fish from deeper in the ocean, they caught the fellow who was doing most of the poaching, and it’s no longer on the nonsustainable list.

We try to buy wild as much as we can of everything. Many people think farm-raised is better for the environment, but in general, it’s the opposite. We do not carry farm-raised anything, except certain types of shrimp. We always get shrimp that has not been treated with chemicals, as far as we know. That gives it a mushy texture, and almost a chemical taste. They have to list it on there, but I’m not always sure that everyone complies. That’s why you have to know who you’re buying from.

VVK: The humanitarian issue of keeping live lobsters in tanks has been in the news recently.
KH: We’ve just never even considered doing that. It never made sense to me. As soon as they put those rubber bands on a lobster’s claws, they can’t eat. So a lobster in a store might have been sitting in that tank, shrinking, for a two to three weeks. The fill goes down – that’s the amount of meat in the shell. Most people buy frozen lobster from us. We do bring live lobster in if you order it the day before.

VVK: What do you do with product that can’t be used?
KH: We’re helping to sponsor a man from Monroe in the Iditarod [an annual dog sled race held in Alaska]. We felt terrible throwing this stuff away. Then we heard about this fellow, a 62-year-old man named Benny Stamm, and thought, Okay! We freeze all our trimmings, and he picks it up for his team of dogs every two weeks. And we take donations for him. We have pictures of him and his team on display.

VVK: What advice do you have for seafood novices, like me, who are intimidated by the idea of cooking fish? It’s not cheap, and I’m afraid I’ll just wreck it.
KH: A good way to start cooking any type of fish is baking. Just a very basic recipe: olive oil, lemon juice, salt and pepper. Stick to the rule of 10 minutes per inch of thickness at 400°. Remember about carry-over cooking after you take it out of the oven. The biggest mistake people make with fish is to overcook it. It gets a stronger flavor and becomes dry.

You want it to be moist and tender. It should still be medium in the center when you take it out. That’s the trick. And it’ll be perfect.

VVK: Have you been surprised by what’s popular and what’s not?
KH: We used to think striped bass would be a big thing, but we hardly every sold any. Then I brought in baby octopus once, sort of as a joke. It sold out. Now we sell out of it every single week. People from Japan, China and Italy like it, and people who have traveled there. They sauté it in olive oil.

VVK: What’s your personal favorite?
KH: My absolute favorite of all time is halibut. I love the texture and mild flavor. I like it baked, grilled, every way. But my favorite way is to grill on an alder plank. It turns a gorgeous, gorgeous brown color on the top. Alder gives a much milder smoke flavor than other woods. A cedar plank is good for salmon, but alder is perfect for halibut. I just started doing it this way since we opened the store. Everything we bring in I try to cook at least once. I’ve tried a lot of new things. Not baby octopus – yet.
Posted by Vesna VK at 7:59 PM No comments:

Labels: Around the Table, Brava, food 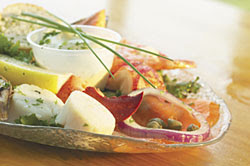 Recipe from Around the Table: Kathy Hughes of Hughes Seafood
By Vesna Vuynovich Kovach
In Brava Magazine (formerly ANEW), November 2006


If you’ve ever had scallops that were mushy, chalky white and flavorless, chances are they spent up to 10 days on a board a fishing boat, soaking in phosphate preservative. Day-boat scallop fishers, by contrast, bring in the tasty bivalves daily, as their name suggests. Kathy recommends serving these fresh beauties with roasted asparagus and pine nut couscous.

Season scallops with salt and pepper. Set a heavy-bottomed saute pan or a nonstick skillet over high heat. Heat a small amount of olive oil. Add scallops and sear for 3 to 4 minutes per side. Serve with Citrus Beurre Blanc, below.

Melt butter in a sauce pan over medium heat. Add shallot and garlic. Sauté briefly, but do not brown. Deglaze with white wine. Bring to a simmer and reduce by one-half. Add orange juice and thyme. Continue to simmer and again reduce by one-half. Add cream. Reduce until slightly thickened. Season with salt, pepper and a squeeze of fresh lemon juice. Spoon over scallops. Sprinkle with chopped chives.
Posted by Vesna VK at 6:28 PM No comments: