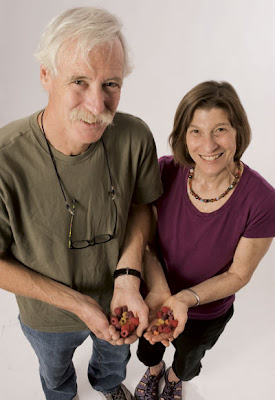 When Terry Cohn and her husband, Michael Johns, learned about the experiments out east at Cornell University, where researchers were growing winter raspberries in greenhouses walled with layers of clear, plastic draping, they knew they’d found the niche crop they were looking for.

After all, says Terry, “We love raspberries.”

In 2001, the couple’s home business -- buying and selling used scientific equipment -- was suffering due to overseas outsourcing of manufacturing. To find a new source of income, they looked to their land: the 5-acre former farm within the city of Madison that they’d bought in 1991, meaning to build a warehouse.

“We wanted to use our land as one of the last farms within the city of Madison. We talked about trees and perennials,” says Terry. Then they learned about extended-season raspberries being grown at Cornell. “They were reported to be outstanding and able to command a good price.“ They realized, with excitement, they already had the foundation for an off-season raspberry farm in their own backyard.

“We had a family garden via survival of the fittest,” Terry says. “We would plant hundreds of plants and vegetables, heavily mulch them because we had no time to weed, and [get] a wonderful harvest.” Included in the mix was “a raspberry patch from plants that we rescued from the property across the road that were to be plowed under for development.”

They saw the potential for a state-of-the-art, environmentally friendly, operation with good demand. “We wanted to produce the highest quality raspberries without using herbicides and pesticides and make them available to local chefs and individuals at the time of year when raspberries were shipped to the Midwest from California, Chile and Mexico.”

Terry dusted off her scientific training -- she majored in in biology and botany in college before becoming “the first physician’s assistant in Madison,” as she say, and later earning another degree in computer programming -- and she and Michael devoted themselves to learning about off-season raspberry farming. And Sow Little Farm was born.

“We first put up a plastic cover that was supported by electrical conduit, the ends covered by tennis balls, over our raspberry patch in November 2002 and heated it with a kerosene heater to keep the plants alive,” she remembers. “One of us would turn it on around midnight and the other one would get up at four in the morning because the fuel only lasted for four hours. Our daughter Leah thought our lives were like getting up with a newborn.” The hard work paid off: “The raspberries were protected, sweet.”

Now all they needed was customers. “We wowed Odessa Piper. She was our first chef customer,” says Terry. A titan in the world of local-produce fine dining, Odessa then owned L’Etoile restaurant on Madison’s Capitol Square. “I did a blind call. I explained how we had extended the season of the raspberries. She was excited and tasted them.” After that, she says, “we would bring small amounts, one to two half-pint containers every week or twice a week, whatever we were able to harvest from our small patch. I would bring a little basket carefully wrapped with a towel. Tory [Miller, then L’Etoile’s chef de cuisine and now its owner] would taste them and I would wait for his reaction. His face would light up and that made my day.”

That first chef connection led to many more. “Odessa encouraged us to expand and have other chefs taste our berries,” says Terry. Today, Sow Little Farm grows seven varieties of raspberries, which they’ve harvested as early as May and as late as December. Some they sell to individuals via e-mail (sowlittlefarm@gmail.com), but most are destined for the fine restaurants in Madison, Chicago and more where chefs clamor for the plump, juicy berries ripened on the cane.

TC: We grow summer and fall varieties, experimenting with staggering their ripening by pruning and [controlling] temperature in the high tunnels. Once the canes are leafing out and starting to form flower buds, we don’t let them get below 34 degrees. The houses get very warm even in the winter, so we have to open windows to keep the plants below 45 degrees while they are dormant.

VVK: What’s a high tunnel? Is it a sort of greenhouse?

TC: It’s a structure of bent metal tubing connected to steel posts driven into the ground, and a wooden baseboard. It’s covered with two layers of plastic with a space between inflated by a small blower. Ours have recycled windows and doors on the end walls for air circulation. We have six high tunnels totaling about 7,000 square feet. Our favorites have a gothic, pitched roof, as opposed to a Quonset shape, and has sides that roll up the entire length.

Putting the huge sheets of plastic on the high tunnels can only be done when there’s no wind. We’ve had great help from groups of friends and family when we got to that stage. Each time that the task was completed, we would look at each other beaming, feeling like we’d just completed a barn raising.

VVK: How did you learn to do all this?

TC: Through our own experiments, attending workshops in Canada and Penn State, and consulting Professor Marvin Pritts at Cornell University. Getting help from our local extension agents. Bob Tomesh from the UW Extension helped orchestrate a visit of farmers from the country of Georgia to our farm. We also had visitors from Tasmania who were researching high-tunnel raspberries as part of a Winston Churchill grant.

VVK: What are some of the restaurants that use your berries?

VVK: How are they to work with?

TC: The chefs that I work with are wonderful. They are flexible with [our] availability. They understand that what we do is labor intensive and the product is superior to getting raspberries from California for half the cost.

VVK: What do you love about raspberries?

TC: Raspberries are sensuous and delicious. We love it when we say raspberries and we notice people’s eyes get dreamy and their mouths form a smile.

TC: Eating them fresh and noticing how long the flavor lasts in our mouth.

“This recipe evolved because we didn’t like how sweet most raspberry jams are. We like seeds in our jam and don't like it when it is thick like Jell-O,” says Terry. “Most recipes call for either more sugar than fruit or equal amounts. With less sugar, one experiences the true flavor of raspberries.” Terry tinkered till she achieved “the perfect tart-sweet combination” that’s perfect in PBJs, mixed into yogurt, or spread between layers of Linzertorte or chocolate cake.

Mix Sure-Jell with raspberries. Bring to a boil. Add sugar. Turn down heat and continue to cook on a low boil for 10 minutes.

Turn off heat. Skim off foam.

Put jam into clean jars, leaving about 1/2 inch space to the rim. Clean the jar rim and seal with new canning lids that have been simmered in water. Tighten rings on the jars.

Boil in a water bath for 10 minutes. Remove jars to cool on newspaper. You’ll hear the lids pop when the seal forms.

Let cool 24 hours, then remove the rings from the jars.