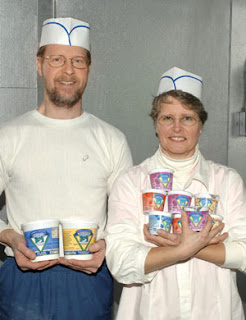 By Vesna Vuynovich Kovach
In Brava magazine, March 2008
Column: Around the Table

In case anyone hasn’t noticed, our state has something of a reputation when it comes to milk. We’ve got nearly 1 in 4 of all the nation’s 65,000 dairy farms, over a hundred cheese-making plants, and plenty of artisan producers.

But a few years back, Ron and Chris Paris noticed a giant hole in the market for small-scale, specialty dairy: practically nobody local makes yogurt commercially. They decided to fill that void with great product of their own, and Sugar River Dairy -- one of only three artisan yogurt makers in the state -- was born. Today, Chris and Ron’s all-natural yogurts, cultured naturally and made without thickeners, colorings, or any of the other additives found in mainstream brands, can be found on the shelves of food markets all over the area, as well as at their booth at the Westside Community Market.

VVK: Do you two have a background in dairy?

Chris Paris: Ron grew up on a farm on the edge of Madison across from Lake Farm Park in Oregon. He got a degree in dairy science from the UW-Madison and held various jobs in the ag industry. My family transplanted to Madison when I was three, but my parents have rural roots in Kansas and Missouri. I’m actually a teacher -- degree from UW-Madison in dance education and early childhood development. In 2004 I went 24/7 with Ron and Sugar River Dairy.

VVK: What was involved in starting up your dairy?

CP: Lots of startup costs and issues. We planned the building and built it 10 steps from my back door. It took two years of planning to find the right equipment and setup. Small processing equipment came from Israel. Everything we could find was meant for big production. The biggest challenge was trying to get a machine to dispense one ounce of fruit on the bottom of a six-ounce cup. Lots of trial and error on that.

VVK: How much yogurt do you produce?

CP: One and a half tons per week, or 3,000 pounds. That’s about 1,700 six-ounce cups and 1,400 24-ounce cups of yogurt. It’s a drop in the bucket compared to most yogurt manufacturers. But we’re often able to make our yogurt one day and deliver it the next. Probably the freshest yogurt available!

VVK: Where does your milk come from?

CP: We use non-homogenized milk from two local, single-source, small farms that don’t use rBST and sub-therapeutic antibiotics. We believe that keeping it simple and clean keeps it healthy. We process it quickly and get it to the market.

VVK: How about your culture?

CP: Our culture comes from a local company. There are huge companies around the world that manufacture cultures. They are very sophisticated and very technical. Some won’t sell to small manufacturers like us. There are small companies who will deal with our minimal needs. We’re lucky to have just such a company in Madison.

VVK: Different yogurt brands can taste very different. How did you come upon the blend of culture that you use?

CP: Different blends have different tastes because of the pH’s they work best in. Ours has a mild, pseudo-American preference. It allows the flavor of the fruit to come through and has worked very well for us. Most European and Middle Eastern countries seem to prefer a more tart, acidic taste. Americans are used to mild and sweet flavors. That’s beginning to change now that we have access to a lot more variety.

VVK: I’ve made yogurt at home by adding a little yogurt to milk and keeping it warm, but it never comes out as solid as I’d like. And I can’t keep it going for the next batch. What’s your secret?

CP: We use freeze-dried culture in the same amount every batch for consistency. Real yogurt doesn’t need additives, but it does require help to absorb all the liquid in the milk, like raising the temperature and holding the milk to denature the proteins. We also incubate in the cup so we can retain the original texture without adding stabilizers. The added, unnecessary stuff doesn’t make real yogurt better -- though it makes it travel long distances well

VVK: What’s the most popular flavor? Do you have more in the works?

CP: Raspberry in six-ounce cups. I’d love to do exotic fruits like locally produced aronia [chokeberry] or black current, but the difficulty lies in the processing. Most fruit processors are in California. We’re looking for a Wisconsin or midwestern processor to work with.

VVK: What happens to the cream after you remove it from the milk to make your yogurt lowfat? I understand you’ll be using it in your own line of sour cream soon.

CP: It gets made into butter, but not by us. Sour cream is getting closer. It’s a different culture, and it takes more time and a different temperature. In larger quantities it can be tricky. We really wanted to have it out by now. Seems like everything takes longer to organize when most of our time is spent in production or delivery.

VVK: Is there any chance you’ll be coming out with a whole-milk yogurt anytime?

CP: Whole milk yogurt is on the way. We just need cups printed -- that’s another story, and two months of waiting. Research is clear about the differences between good versus bad fats, but people mostly focus on the word “fat.” They tend to equate fat with calories, and nutrition is a lesser issue. There’s also research indicating that non-homogenized milk may be healthier.

VVK: What else is next for Sugar River Dairy?

CP: A new delivery truck!
Posted by Vesna VK at 7:53 PM No comments:

Choose a combination of two, three or four fruits. “Very simple.“ says Chris. “Go local or regional if possible. The only frozen I use are those I freeze myself -- strawberries!” Cut in chunks about the size of ice cubes, or use a melon ballers. Arrange atop vanilla yogurt in individual serving dishes.

Fruit combo suggestions:
Apples, pear and cherry
Watermelon, cantaloupe and muskmelon
Thimbleberry (they’re like raspberries, but bigger and softer), grape and blueberry
Mango, guava and strawberry
Pineapple, banana and clementines or tangerines
Posted by Vesna VK at 7:56 AM No comments: