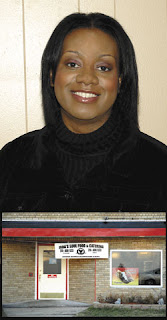 By Vesna Vuynovich Kovach In Brava Magazine, February 2007
Column: Around the Table

Offering down-home fare like fried catfish, smothered chicken, homemade baked macaroni and cheese, cornbread, sweet potato pie and more, Jada’s is packed with customers who long for a taste of the South, and for down-to-earth, wholesome, home-cooking quality.

Self-described “die-hard foodies” Jackie and Linda Clash (JAckie + LinDA = “Jada”) decided to open the restaurant only after they’d built themselves some security in the form of a first business, a residential and commercial janitorial service “that was easy to set up and get going,” says Linda. But serving up good food has been their target ever since they noticed Madison’s potential for soul food.

“Jackie was driving along Rimrock Road one day a few years ago when he saw a sign outside a restaurant that said, ‘Soul Food served Sundays,’ says Linda, a 36-year-old Madison native. “He went inside, but the owner said they’d discontinued it after the cook left. So Jackie volunteered. The response was overwhelming.”

Jackie was no stranger to the kitchen – he’d grown up working at his parents’ restaurant, Shorty’s Soul Food on the south side of Chicago, as well as cooking for his four siblings at home. He’s also an alumnus of MATC’s pastry arts program. “He’d been working on his recipes since his early days at Shorty’s and looking for ways to make it better,” says Linda. For her part, Linda had helped her best friend, the owner of the now-defunct Southern Flavor, with catering events in the early 1990s. The Clashes realized that with their experience and their love of food and cooking, they could take the soul food concept far beyond a weekly gig. They decided to work towards opening their own place.

Today, with their Dirt Destroyers business going strong, the Clashes work hard to keep up with booming business at Jada’s, where Jackie cooks and Linda manages catering and customer service. And right across the street, still cutting hair at Style & Grace at 83 years old, is Linda’s father, Taylor "Smitty" Smith. “He was the first African-American barber in Madison,” says Linda. “He and my mother, Helen, are still active members at Second Baptist Church. They’ve been in Madison 65 years!”

VVK: What has been your biggest surprise so far connected to this business? What have you learned along the way?

LC: Our diverse customer base! It is such a blessing to see people of different races and from all walks of life stopping at Jada's for a good meal. We understand and cherish the fact that Jada's was a God-given blessing from conception, and we know that lots of restaurants don't receive the kind of response we have so early on. We don't take anything for granted!

VVK: What do you think is the appeal of soul food, especially yours?

LC: When food is cooked with love, people respond to that. Every dish at Jada's has lots of love behind it. Every recipe is something Jackie and I love. It wasn't placed on the menu for any other reason. We will always serve food that has meaning for us. This resonates with our customers as well. I can't count the number of times I've had customers reminiscing about food they used to love as a kid, or something their mother used to make them when they taste our food. That's why we do what we do.

VVK: What do people encounter for the first time at Jada’s, and how do they respond?

LC: Greens! That has become our soul food icebreaker. Anyone that comes in looking to try something new, I always steer them in the greens direction. Our collard greens have so much flavor, and come three different ways – vegetarian, with smoked turkey, and with smoked pork – that there’s bound to be a connection with just about everyone. We occasionally offer a collard and turnip mix, but for the most part, we serve collards. Jackie and I love collards! We buy local produce from the farmer's market when it’s in season.

VVK: I read in Isthmus that Jada’s is the only place in town serving up chitterlings. You know, I’ve heard about them all my life, but I don’t really know what they are.

LC: For seasoned soul food eaters, the chitterlings (pronounced “chit-lins”) are the number one draw at Jada's. People are pleasantly surprised when they find them on the menu. We always sell out! Chitterlings aren't that complicated to prepare, they’re just time consuming. Most customers love that they don't have to do the grunt work at home – we've already done it for them. I'm going to keep the identity of chitterlings a secret, and encourage people to come in and ask! I find that just about every cuisine has its own type of unique item that you just won't find anywhere else.

VVK: What’s the difference between your fried chicken and what people are used to these days from fast food chains?
LC: Our chicken is a wonderful, well-kept secret! Our technique is unique, and the reason you won't find any fried chicken like ours in Madison is because it never sits under a light. All of our meats, with the exception of chitterlings and ribs [these are slow-cooking foods], are prepared right when you order it. You can always call or fax in your order for faster service, but we will never change that particular practice.

VVK: Somebody on an Internet forum said your cornbread is Northern-style because it’s sweet, even though you specialize in Southern cookery. What’s your philosophy on cornbread?

LC: I'm not sure if it's a Northern or Southern practice, because I've been served sweet cornbread countless times when I visit the South. I like both sweet and savory cornbread. Our cornbread muffins are sweet, but our cornbread dressing in gravy is not. Our dressing is like Thanksgiving stuffing. The gravy is chicken- and turkey-based, and made from scratch.

VVK: What’s been the biggest challenge been in making Jada’s a success?

LC: The long hours. Jackie and I realize we need to be as hands on as possible in the beginning, so we make it a priority to not sweat the small stuff. We are committed to making sure we steward our time wisely. You may see our children playing at the restaurant!

VVK: What plans do you have for the future?

LC: We have so many plans for Jada's! There may even be a joint venture cooking up in our near future – stay tuned to find out. Jada's Soul Food and Catering has some wonderful things in store for Madison. We are here to stay!
Posted by Vesna VK at 9:40 PM 2 comments:

A savory, golden brown crunch through to a tangy, subtly sweet, juicy center: that’s the essential fried green tomato experience. “This recipe was perfected last summer when my craving and quest for fried green tomatoes led me to preparing them almost every day,” Linda says. “These will definitely be on Jada’s menu this summer!”

With the right combination of ingredients and a methodical approach, you can produce this classic Soul Food dish in your own kitchen. “The key is being completely prepared before you begin the cooking process,” she says.

Slice tomatoes 1/4 inch thick. In a skillet, heat the oil over medium high heat. Set out two bowls near the stove. In one, place the buttermilk. In the other, mix all dry ingredients. Dip each tomato slice in the buttermilk, dredge it in the dry mixture, and place in the skillet – gently, so as not to spatter hot oil. Repeat until there are several slices in the skillet, but with plenty of space around each. (Overcrowding the skillet will drop the oil’s temperature, yielding a soggy, greasy result.) Fry approximately two minutes on each side, or until golden brown. Remove to a plate; then dip, dredge and fry the next batch. Serve immediately.
Posted by Vesna VK at 7:54 PM No comments: