This microbrewery partner gets the beer out the door 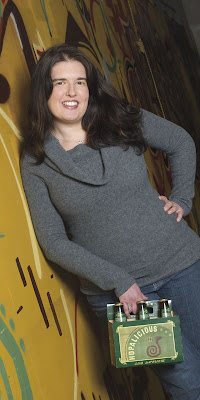 In the spring of 2006, a sign reading “Ale Asylum” sprouted in the front yard of one of the low-slung buildings scattered amidst the airfields and shipping depots along the broad corridor of Stoughton Road leading north of town towards the interstate. A brand-new microbrewery and table-service deli was open for business.

The four friends planting their life savings in the endeavor knew they were entering a field as crowded as their surroundings were sparse – craft brewing businesses are legion in this part of the Midwest. Now, scarcely three years later, Ale Asylum has become a formidable presence on the local microbrew scene: omnipresent at summer festivals, available in bottles at close to 125 stores and on tap at more than 80 bars and restaurants, all the while serving up booming business at the cozy tap room and eatery onsite.

Hathaway Dilba, originally a fashion designer (her line of custom coats, Volante, was featured in this magazine’s premiere issue in 2002) and later a fitness instructor, is one of the Ale Asylum’s four partners, along with brewmaster Dean Coffey, Glenn Schultz and Hathaway’s husband, Otto, a graphic artist.

“I had total faith in our product. I had faith in every part of my body,” says Hathaway (friends call her Hath), “but still it surprised me how fast we took off.”

VVK: What’s the secret to your success?

HD: A lot of it is Dean. He won many awards at Angelic, and he had a following. Glenn plays a significant role. He’s part of our sales force, he’s our face at festivals, he’s brought in other investors and he’s an amazing handyman.

Our name is a huge factor. People say, “Did you just say … ‘asylum’?” And alphabetically, our beers will appear at the top of lists at bars.

VVK: All your names and branding elements are powerful and catchy – Big Slick Stout, Ambergeddon – with strong logos. Who does that?

HD: Otto is is my hero because he can run the business operations and come up with our branding and creative work as well. He was assistant brand manager at Planet Propaganda. One could say that he has the perfect combo of right and left brain.

Everything we do, names and labels, have to get approved by the U.S. Alcohol and Tobacco Tax and Trade Bureau. We had trouble with our slogan, “Fermented in sanity.” We had to point out that it said, “sanity,” not “insanity.” We wanted to name a porter “Disporterly Conduct,”and use handcuffs in the logo. They said no. But our Ambergeddon logo has guns, and that got passed. A lot of our artwork is controversial.

VVK: What do you do?

HD: Event planning, marketing, cooking and working for events. I love working on the bottling line. The camaraderie of it. It’s kind of like diapering your baby; you want to do it yourself. And you have to move pretty fast! I like putting the bottles in the boxes and seeing them put on the truck. It’s the end result of so many people’s work. I don’t ever want to take it for granted.

I’m not involved in the chemistry, which is very complicated. The bottling line is the way I can be involved. I love it. Being the only woman back there, it’s fun. I’ll cook at home and bring in lunch for the crew, or muffins. They call me “Mama Bear.”

VVK: How come no full-service restaurant?

HD: All the years my husband worked in the restaurant industry, he learned what a pain in the butt a hot kitchen is. He said, “You know what? Let’s just have a pizza oven and a deli.” Saves a lot of money in insurance, too. We figured keeping our restaurant simple was a really smart move, so we could focus on getting the beer out the door.

VVK: Have you won any awards?

HD: We’ve won a variety of best-of-show awards at area beer festivals. We won a bronze for Madison Magazine’s Best of Madison brewpub in 2007 and 2008, even though we’re technically not a brewpub. We’re a microbrewery.

HD: Even though Ale Asylum has a bar/deli as part of our business structure, the majority of our sales occur offsite, from beer distributed to area bars and liquor stores in the form of kegs and cases.

VVK: How much beer do you guys make?

VVK: What’s your most popular beer?

HD: Hopalicious, an American pale ale. It’s bold in hop flavor without being bitter, which makes it a great beer for experienced drinkers and novices alike. Across the Midwest there’s been a dramatic increase in demand for hoppy beers.

HD: I love our Sticky McDoogle Scotch Ale. It’s just fun. It’s got a little kick to it. it’s smooth, and for me it’s got a little curtain of caramel in it. Very popular with women. We supplied the beer for the Arthritis Foundation, a nonprofit gig. There were mostly women there, and the Scotch ale went so fast I had to order more from the brewery.

I love the Hatha-Weizen. I love the citrus note – it’s not in your face; it’s not too tart. It goes with everything. My favorite thing is to drink it on the beer patio the first warm night.

VVK: That’s named after you – a play on “hefeweizen,” or wheat beer, right?

HD: I feel very honored because my husband named a beer after me. I’m both touched and excited because that is my all time favorite beer that Dean makes. I'd be lying if I didn't say that it’s my favorite name.

VVK: Do you ever miss the fashion business?

HD: Fashion always played a special part of my life, and I have deep respect for the industry. I still follow it. But I don’t miss working in the business. It wasn’t the correct template for me. I’m glad I did it, though, because I never would’ve known.

VVK: Tell me about your involvements outside the Ale Asylum.

HD: I do philanthropy on the side, which I really enjoy. I’m involved in a group called Womenade of Madison that holds events supporting different organizations that are not so well known. At the Children’s Theater of Madison, I chair the education committee and am the board secretary. I was just invited to join the executive committee of A Fund for Women, and my first gut reaction was, oh my gosh, what a fantastic honor.

I go crazy unless I have projects and a lot of stuff to do. I start to have an identity crisis.

VVK: Have you always been a craft beer fan?

HD: I’m a novice, kind of a beginner beer geek. I’m not on the brewers’ guild like Dean and Glenn. When people are discussing beer while they’re drinking it, I like hearing it. My favorite thing is sitting in our bar and watching someone sip our beer and watching a smile come over their face. I like that moment.

I love listening to Dean talk about beers. When he has a beer out, it’s such a special moment. He’s so passionate about what he does – I get excited when he’s excited. If he’s talking to a beer-geek friend, he’ll talk in complexities. To me, he’ll tone it down. He’s really good that way.

VVK: What’s the atmosphere at your place?

HD: A biker once told us, “I love the décor – it’s like a martini bar, but with balls!” I call it industrial chic. It’s a diverse customer base. One night I saw a motorcycle dude sitting next to a business dude next to somebody who could have been a punk rocker, with tattoos up and down their arm. Older married couples will pop in for a night cap. We have a lot of Air Force guys coming in off duty. They love flying over the place – their landing strip is very close to us. They’ll do wing tips and stuff like that for us when they fly over.

We don’t have TVs. We’re very proud of that. We get killed on Packer Sundays and Badger Saturdays. But we don’t want people just staring at a TV. We want there to be discussion, conversations, like the bars of yesterday.

HD: Right now, no. It would really take away from our focus.

VVK: So what’s next for Ale Asylum?

HD: We’re thinking about putting up our own grain silo this summer. That will look cool to the pilots when they fly overhead!

Each month in her column “Around the Table,” freelance writer Vesna Vuynovich Kovach profiles women who are influential in Wisconsin foodways: cooks and bakers, farmers, teachers, authors, activists and more.
Posted by Vesna VK at 8:44 PM No comments:

South of the Porter Chocolate Cake

Related article: Ale Asylum’s Hathaway Dilba: This microbrewery partner gets the beer out the door

“What I like best about this cake is the actual process of making it. It’s easy and relaxing,“ Hath says. “Porter adds a velvety richness that pairs well with the chocolate and spices.”

Grease and flour a 13" x 9" x 2" baking pan. Heat porter over medium high heat, removing from heat as soon as it comes to a slow boil. “The trick is to do it slowly and to keep an eye on it. Otherwise you'll have big mess on your hands when it boils over,” warns Hath.

Stir together sugar, flour, cocoa, baking powder, baking soda, salt, cinnamon and ground cayenne in a large bowl. Add eggs, milk, oil and vanilla. Beat at medium speed for two minutes. Stir in porter. Batter may be thin. Pour batter into prepared pan. Bake 35–40 minutes or until a wooden pick inserted in center comes out clean. Cool completely by placing pan on a wire rack. Once cooled, shake powdered sugar over top.
Posted by Vesna VK at 8:39 PM No comments: