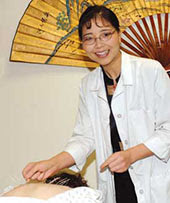 In the reception area of the Beijing Acupuncture & Chinese Herbal Medicine Clinic in Middleton, the air is fragrant with the stinging scent of Chinese medicinal herbs. On the counter a blue glass vase brims with fresh flowers of purple, yellow and pink. These blossoms have a bite, albeit a painless one: they’re snapdragons. If you were to squeeze open and then release one by its bulb-like, jointed base, it would shut with a snap – firm and lightning fast, but also velvety, petal soft.

They seem an apt decoration for the acupuncture clinic founded in 1997 by Leaf Song, O.M.D., M.S., L.Ac., who specializes in “creating the energy flow” that she says promotes weight loss, facial rejuvenation, lifting of depression, smoking cessation, pain relief and more. And it’s not only because beautiful items from nature befit the natural healing philosophy behind Traditional Chinese Medicine (TCM). The gentle nip of a snapdragon mirrors her style of acupuncture needle insertion, as well.

“Her touch is very soft,” explains her husband, Jonathan Song, O.M.D., M.D., Ph.D., L.Ac., who is also a TCM doctor and who joined the Beijing Clinic early in 2005. “Patients like when she’s needling. She knows the American style.”

After the Chinese-born Dr. Leaf realized that “Americans’ bodies tend to be more sensitive to needles,” as she puts it, she applied herself to developing techniques that would be acceptable to even the most needle-shy among us.

“She practiced at home to learn how to maneuver needles so that they would be painless. That’s what makes her different from other acupuncturists,” says Dr. Jonathan. “She practiced on her own body. And on me and our daughter,” he adds with a laugh.

Dr. Jonathan says that each TCM practitioner has a different style; it’s more of an individual art than Western medicine, even though both are rigorous professions based on vast, time-honored bodies of knowledge. Dr. Leaf, he says, “has a unique view. She sees the problem precisely and gets a very good result. She’s particularly good at lower back pain and at women’s health issues, like infertility. It’s often a complicated situation. She can see it as a simple thing and treat it in a simple way.”

Dr. Leaf’s therapies include Chinese herbal medicine as well as acupuncture; both have been essential components of TCM for thousands of years. The slim 44-year old is particularly enthusiastic about her herbal approach to weight loss. “We’ve developed our own herbal formula that’s very safe and effective,” she says. “It opens up your energy and moves out stagnation. It’s a circle: overweight causes energy stagnation, and stagnation causes overweight.”

Though terms like “energy” and “stagnation” might sound like fuzzy New Age talk to the Western ear, they have ultra-precise meanings for a doctor of TCM. And Dr. Leaf is well qualified to use them. She began her studies at the Zhejiang College of Traditional Chinese Medicine in Hongzhou, where she met her future husband. They moved to Beijing, where he went on to get his M.D. at the Peking Union Medical College and she continued TCM studies at the China Academy of Traditional Chinese Medicine. There Dr. Leaf was awarded her the Hu Shi-Xi award for distinguished achievement in Chinese medicine in 1987.

In 1989, Dr. Jonathan arrived in the U.S. for the Ph.D. program at Michigan State University. Dr. Leaf followed soon after with their baby daughter, Willa, who is now a 15-year-old Middleton High student. After postdoc work at the University of Rochester studying Alzheimer’s disease, Dr. Jonathan came to the UW-Madison for multiple sclerosis research in 1997.

The doctors chose their lyrical, Westernized names after coming to the States. Dr. Jonathan’s birth name, Jian Xiong, is pronounced like “John Song.” He found the name “Jonathan” – he prefers it to “John” – in a baby name book presented to him by his Ph.D. professor, who encouraged a name change to facilitate his American career.

Dr. Leaf followed suit, translating her family surname, “Ye” into its English meaning, and making it her new first name.

The daughter of a doctor of Western medicine and an office administrator, Jia Nong Ye was born in China in 1961. “I grew up in a hospital. The front was the hospital building, and the back was where the doctors and nurses and their families lived. You couldn’t go out without going through the hospital part.” When it came time to choose a career, says Dr. Leaf, medicine was the natural choice. “I didn’t know anything else,” she says.

In the mid-1960s, during China’s Cultural Revolution, “Mao gave the order that all M.D.s must study acupuncture,” says Dr. Leaf. Her mother was among them. Later she encouraged her daughter to go into TCM. “She said it was a good career for a female. Western doctors are on call and in the hospital for such long hours. So acupuncture would be good for a woman, a wife. That was the reason I went to school for Chinese medicine.”

Since then Dr. Leaf has distinguished herself as an accomplished and caring healer. Along with her many years of practice, she has published several peer-reviewed journal papers and book chapters on TCM. She is working on a book about diet and health.

In addition, she and Dr. Jonathan are senior clinic supervisors for the Midwest College of Oriental Medicine in Racine. One or more students works as an intern at the Beijing Clinic – the only one authorized by the school – most days. Debbie Gordon, R.N., who will be graduating in June, is impressed with her experiences here. Many patients, she says, arrive after Western medicine hasn’t been able to help them. “They have test after test, and can’t get a diagnosis for their pain or chronic fatigue. But their condition fits an Eastern diagnosis,” she says. “This is a wonderful clinic. They do wonderful work here.”

In recent years, awareness and acceptance of TCM has come a long way in America, says Dr. Leaf, but still “there’s a lot we can do. The American diet, stress – people don’t know how much these things affect your health. They never make any connection with their chronic pain or allergies,” she says. “Diet and herbs, properly chosen for the proper effect,” can be powerful tools for health: “You can revive up your body and move your energy.”

Looking to the future, Dr. Leaf plans to move the clinic out of the storefront rental and into its own building, expanding it into a total center for holistic health. “I want to do more group practice. Add other kinds of health care, with nutritional consultants, massage therapists and more,” she says.

After practicing in two countries and several American cities, Dr. Leaf Song is here, in the Madison area, to stay, to grow and to continue to blossom. And that’s good energy.