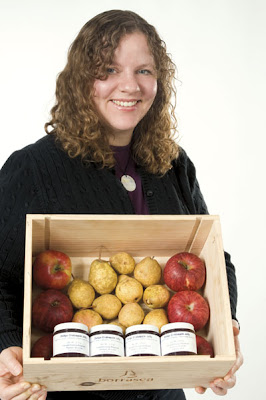 
“You can put it on a shelf and open it in winter and it will transport you back to summer with one bite.”

That’s why Lee Davenport makes jam. And jelly. And preserves, conserves, fruit sauces and all those other ways of compressing summer sweetness into a glittering jar of spoonable delight.

“You can take some really delicious fruit and make it taste even better,” says the 36-year-old proprietor of Pamplemousse Preserves, of her passion for preserving. “I personally can’t think of many things in life as rewarding as turning a pile of raw ingredients into a row of jewel-toned preserves. But maybe that’s just me.”

There’s also the appeal of “keeping a dying art alive,” says Lee, who is a New York State native with a B.A. in psychology from SUNY-Plattsburgh. “I like a lot of vintage and old-fashioned things. I like making things by hand.”

Around the Table caught up with Lee Davenport once before, in early 2005, when she was running a food cart downtown that featured a creative, from-scratch menu. “It was tons of work and I didn’t really have much of a life the summers that I did it,” Lee says of her decision to move on to Pamplemousse. “Most people who run food carts either have restaurants or it’s a family affair.” Earlier culinary credits include baking at L’Etoile and Sunroom Cafe.

Today Lee jams with local and/or organic ingredients -- she even grows her own black currants, rhubarb and tomatoes -- using recipes that call for little or no commercial pectin and far less sugar than ordinary preserves. She sells at farmers’ markets, through her new Web site (pamplemoussepreserves.com), and at the gourmet shelves of L’Etoile’s Cafe Soleil, Fork and Spoon, Fromagination and Washington Hotel Coffee Room. Her treats are on the menu at Bradbury’s downtown.

“This is like a value-added CSA,” Lee explains. “Our tag line is ‘keeping your pantry stocked with hand-crafted staples throughout the seasons.’” Twice a month CSP&B shareholders receive a unique assortment of bread, butter cake and pastry from Mary White’s Honey Bee Bakery; kraut, kimchee or other fermented vegetables from Andy Hanson’s Kindly Kraut; and Lee’s preserves. “Opening a CSP&B box is like Christmas because of that element of surprise. You don’t quite know what’s going to be in the box, but you’re pretty sure you’re going to love it,” says Lee.

VVK: How did the idea for CSP&B come about?

LD: The summer I was a cook at Harmony Valley Farm, I read an article about a woman in Minnesota who had taken the CSA concept to the next level by making salad dressings and other prepared foods from things she grew. That summer I went a little crazy preserving the harvest and I thought a CSA for preserves might be a way to make some money doing something that I loved. I asked Andy and Mary to join me because we all needed a way to keep making money through winter when the outdoor markets stop. We all source as many local ingredients as we can, and we can help people eat local year-round.

VVK: How has customer response been?

LD: People have been wowed by the boxes so far. If things go well, we plan to add other Wisconsin products such as yogurt, honey and kombucha.

LD: A lot of people say they don’t like kraut, but they haven’t had kraut like Andy’s, which is a natural, wild ferment. It is a live food, and so good for you. It’s fresh and crunchy. I actually eat ferments as a stand-in for salads in the winter.

LD: The baked goods are made the same day they’re delivered. I think Mary is one of the most talented bakers in Madison. She uses freshly ground flour from Cress Springs, organic ingredients and whole grains. Her breads are always tasty but I love her tartlets the best.

VVK: Where do you make the products that go into the box?

LD: Andy and I still share a [commercial] kitchen and Mary is currently working out of Sophia’s Bakery. We’re all licensed.

VVK: What have some of the box combos been so far?

LD: We each have a little bit of a fan base so most of the early adapters are already familiar with our products and want to keep getting them in the winter months. Before the CSP&B there was really no way to get all these treats year-round.

VVK: You tell a wonderful story on your blog (welcometomypantry.blogspot.com) about a milestone incident that got you preserving fruit.

LD: I used to live right downtown on Wilson St. I went out for a jog and found [a fallen] limb full of plums. I took them to Mifflin Coop to have them weighed. I don’t even remember what I made from them, but most likely plum butter. I still have other apple and plum trees that I glean from around town. I have always been a frugal person and I hate waste. This sometimes gets me into trouble because I can’t say no to free fruit and sometimes end up wasting it because I don’t have time to deal with it all. If I didn’t have to work for a living I would start a gleaning organization to work with farmers to get more unwanted produce to food banks.

VVK: How much jam do you make?

LD: During the busy summer months, I make several hundred jars a week. I spent a lot of time this summer acquiring fruit.

VVK: What kinds do you make, and which are most popular?

LD: Every season I add more of my own creations like the Elderflower Wine Jelly, and Coffee Caramel. I just like to play around with flavors. [Most popular is w]hatever I happen to be passing out samples of. To try them is to buy them! The tomato jam was the big hit of this summer. I don’t think I had a single person who didn’t like it.

VVK: What are your favorites?

LD: Pear Chocolate, and Apricots with Pinot Grigio. I had never really liked apricots before I made this. I think that unless you get a perfectly ripe apricot right off the tree, they are improved by cooking. This tastes how you would imagine the best apricots should taste.

VVK: What advice would you give someone who wants to give home canning a try, but who might be afraid that it’s too dangerous or complicated?

LD: By the Ball Blue Book and get cracking. If you know how to read a recipe, you can learn how to can. I don’t know where this fear comes from. There are so many more things we do on a daily basis that are so much more risky!

Each month in her column “Around the Table,” freelance writer Vesna Vuynovich Kovach profiles women who are influential in Wisconsin foodways: cooks and bakers, farmers, teachers, authors, activists and more.
Posted by Vesna VK at 7:32 PM No comments:

Related article:
Jam on -- and on: It's always summertime in Lee Davenport's little glass jars
In Brava Magazine
January 2009

Here’s a panna cotta recipe Lee likes to hand out at the farmer’s market because, she says, “it’s simple and elegant and it’s a great blank slate to serve with my preserves.” At the market “I had it paired with rhubarb passionfruit preserves. It would also be great with any of the berry preserves -- Summer Fruit Medley, Trio of Berries, raspberry.”

Lee’s version of the classic Italian treat (literally “cooked cream”) is “a little lighter and tangier” with the addition of yogurt.

Sprinkle gelatin over water in a small bowl and let stand for 10 minutes or until softened. In a small saucepan, combine sugar with one cup of the cream and bring to a simmer while stirring. Remove from heat. Add softened gelatin. Stir until dissolved.

In a separate container (preferably one with a pouring spout, like a one-quart Pyrex measuring cup), whisk smooth the yogurt, vanilla and the remaining cream. Pour in the hot mixture and whisk smooth. Divide among six ramekins, tea cups, or small bowls, pouring 1/2 cup into each. Refrigerate uncovered until cold, then cover with plastic wrap and refrigerate overnight.

Serve panna cotta right in the ramekins or invert onto plates. To invert, set ramekins into a pan of hot tap water for 30 seconds, making sure water doesn’t get into them. Run a knife around the inside edges and turn onto dessert plates. Remove the ramekins. Top with preserves.
Posted by Vesna VK at 5:35 PM No comments: