Column: Around the Table
Recipe: Spaghetti Squash with Meat Sauce
A version of this article was published in Brava magazine, August 2007 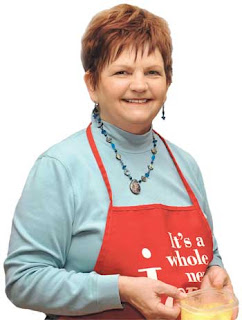 Until this spring, Jan Deadman used to be what used to be called a home ec teacher. But let’s back up a little.

A 1963 graduate of East High school, Jan earned a degree in home economics at UW-Stevens Point. In 1972, she joined the faculty of her high school alma mater as one of seven teachers in the home economics department. By the time she retired this year, 35 years and several thousand students later, she’d lived through some enormous changes, both in her field and in the cultural – and culinary – life of Madison and the United States.

First of all, her department got a name change: it’s now “family/consumer education” – FCE for short. And, although its staffing has gone down to three teachers over the years, it’s evolved into one of the school’s most vibrant fields.

Once widely seen as a stodgy single-sex subject that prepped girls for homogenous, housewifely futures, today’s FCE teaches boys and girls a wide variety of life skills and professional development tools for the modern world. “It’s so much more than just cooking and sewing. It’s child development, medical occupations [including a CNA (certified nursing assistant) program], fashion and design,” says Jan. “I believe we have the strongest FCE program in the city.”

East’s foods classes are among the school’s most popular, although funding is a problem. “We had to drop about 200 students from taking foods next year because we don’t have the teacher allocation, or the budget for that matter. Foods is an expensive class to teach,” Jan explains.

Jan says the popularity is due in part to the new cool that cable’s Food Network has brought to cooking and the food trades – a new culinary arts course is debuting this fall. But it’s also because of changes in the classes themselves. Over the years they’ve come to celebrate creative cookery and ethnically diverse culinary heritages, appropriately enough at the school that Jan describes as having the most diverse student population in town.

It wasn’t always this way. In 1972, Jan remembers, “things were pretty regimented, not flexible at all. We had to wear aprons and hair nets. We cooked only very, very simple things: plain biscuits, plain muffins. Now, if kids decide they want to do a special kind of food preparation from their country or cultural background, in a sense, they’re the experts. We learn from each other.”

Let’s back up just a little more – about a century – to appreciate just how very far home ec/FCE has come with regards to kitchen creativity and ethnic food traditions.

Late in the 19th century, a pioneering New England chemist named Ellen Richards decided it was time to modernize one of the most crucial skills ever developed by humankind: the areas of knowledge and skill long known – and disdained – as women’s work.

This happened to be the era when the pantheon of serious academic disciplines as we know them today – biology, chemistry, history, mathematics and so forth– was being shaped in universities across the Western world. At the same time, science and sanitation promised to improve working-class life in cities that had become crowded and polluted over a century of industrialization.

Richards, the founder of home economics (she was also MIT’s first female student, and later its first female instructor), was determined to elevate the practice of clothing, feeding, and creating a comfortable and sanitary household. “Home economics stands for the ideal home life for today unhampered by the traditions of the past [and] the utilization of all the resources of modern science to improve home life," she said in 1904.

With the support of the chemists of the day, who were just discovering the existence of vitamins, early food processors, who were sharply aware of their own interests in a nutritionally aware public, and other social progressives, a new academic discipline was born, one centered around the household sciences. Unfortunately, the most logical name for this field – “economics,” Greek for “rules of the household” – had recently been taken by a bunch of money-focused men who had somehow managed to ignore everything about households that had anything to do with women. Hence the addition of “home” to economics, and the word was transformed into what, perhaps, its meaning should have been in the first place.

There was a dark side to the movement, though. In those days, as today, waves of immigration brought seemingly endless change to the American cultural landscape. But back then, ethnic culinary traditions (Iike spicy flavors) and customs arising from urban and rural working classes (like stews and other one-pot meals) – were believed to be unhealthy, unclean and downright ignorant. Home ec textbooks throughout most of the twentieth century featured straightforward dishes seasoned with little besides salt and pepper. Over the past several decades, mercifully, attitudes have changed.

JD: We study global issues relating to food. Also, we prepare foods from the ethnicity of the kids in the class. One week this spring we did soul food: fried chicken, barbecued ribs, collard greens, macaroni and cheese from scratch. Dessert was sweet potato pie. After that, we did an Asian lab – we have a lot of Hmong students – with egg rolls, spring rolls, stir-fried rice and green papaya salad. Also, we have many students with Scandinavian roots. We get someone to demonstrate lefse [a traditional flatbread]. We make Swedish meatballs and have a smorgasbord kind of thing. Chef Sabi [host of a local television food show] graduated from East in the late 1980s – he comes in and talks about Mediterranean diets and does demos for the kids.

VVK: How do the students respond to unfamiliar foods?

JD: I think kids today are very respectful to trying new things. Madison has so many wonderful different kinds of restaurants – I think the kids take that for granted. Whatever it is, I insist that they at least try it. One dish – I’ll never forget this one – was from a Japanese family. Mother and student prepared an eight-course Japanese meal, including octopus marinated in soy sauce, a typical appetizer in Japan. That was a real stretch for me. I did try it. But because it was raw, I told the class they didn’t have to. I said eating raw meat or fish was something people in our culture had a real problem with. I didn’t want parents calling to complain that I was making their children eat raw meat! The student was grateful for the kids who did try it. He understood. 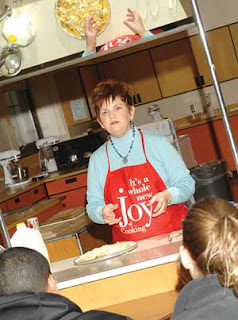 VVK: Besides more tolerance and more interest in cookery, what other changes have you seen in students over the years?

JD: Less time is spent in food preparation and we are distinctly at risk of losing favorite family recipes. Cultural specialties risk extinction. Plus, many families do not eat together. I see that as very sad – a huge loss for everybody.

A major problem, then and now, is that most students don’t read the entire recipe when cooking. Two boys were doing a final cooking project – a cake recipe – and they were not to ask me any questions. After about five minutes they came to me and said they were all done. I couldn't believe it. I went to their kitchen, opened the oven, and to my surprise, they had put all their ingredients in the cake pan and put it in the oven. There sat the whole egg, the chunk of butter, all the dry ingredients. Nothing had been mixed. They had just read the ingredients and thrown it all together! Many students then and today just don’t listen and that perhaps is the beginning of the problem. I do think it’s worse today.

It seems there were fewer people, especially young children and teens, with weight problems back then. People in general were more physically active. There wasn’t the total media overkill on appearance, especially for young girls and teenagers. The whole issue of thinness and eating disorders was unheard of back then. Therefore we must work even harder to … convey the understanding and practices that will promote wellness as young people choose the habits that will follow them throughout their lives. Unfortunately, many middle school FCE programs have been eliminated. I see the consequences when we get high school students who haven’t had any experiences with food preparation or nutrition concepts.

Now we have the emphasis on organic, and organic is expensive. At least half of my students qualify for free and reduced lunch. Food choices then become a matter of what is more reasonably priced and will feed the most.

VVK: What was one of the most memorable meals you prepared as a class?

JD: When the kids wanted to do a Thanksgiving meal. I agreed. Then I realized: I’m going to have to put this turkey in the oven at 4:30 in the morning! We had a full, sit-down, Thanksgiving meal at 8:30 a.m., with cranberry relish, sweet potato casserole, mashed potatoes, stuffing. Just totally a traditional menu.

There were no leftovers. So many of the kids in the class weren’t going to have a meal like this for the real Thanksgiving. They couldn’t afford it. A lot of people in Madison don’t know that exists in our city.