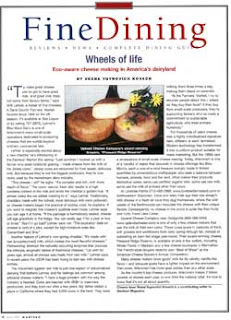 “To make great cheese, you’ve got to have great milk. And great milk does not come from factory farms,” says Willi Lehner, a maker of fine cheeses in Dane County. A Dane County Farmers’ Market favorite since 1988 (in the off season, it’s available at Star Liquor or by calling 767-2875), Lehner’s Bleu Mont Dairy is one of Wisconsin’s many small-scale operations dedicated to producing cheeses that are worlds beyond ordinary, commercial fare.

Lehner is especially excited about a new cheddar he’s introducing at the Farmers’ Market this spring: “Last summer I hooked up with a farmer who does rotational grazing. I made cheese from the milk of his Jersey cows.” Jersey cows are renowned for their sweet, delicious milk. But because they’re not the biggest producers, they’re now rarely used by the mainstream dairy industry.

“This cheese – oh!” he sighs. “It’s complex and rich, with more depth of flavor.” The cows’ natural, fresh diet results in a high carotene content in the milk, which lends the cheddar a golden hue. “It almost looks like we added coloring to it,” says Lehner. Traditionally, cheddars made with the richest, most delicious milk were yellowish, so cheese makers began the practice of adding color, he explains. If you want to magnify this cheese’s qualities even more, Lehner says you can age it at home. “If the package is hermetically sealed, cheese will age gracefully in the fridge. You can easily age it for a year or two or three.” Won’t it go bad? Lehner says not. “The expiration date on cheese is kind of a joke, except for high-moisture ones like camembert and brie.”

Another feature of the spring cheddar: “It’s made with raw [unpasteurized] milk, which makes the most flavorful cheeses.” Pasteurizing destroys the naturally occurring enzymes that produce the intricate, enigmatic tastes of traditional cheeses. “Up until 50 years ago, almost all cheese was made from raw milk,” Lehner says. In recent years the USDA has been trying to ban raw milk cheese entirely.

The movement against raw milk is just one aspect of industrialized dairying that bothers Lehner, and his feelings are common among artisanal cheese makers: “I have a huge problem with the way the industry is headed. Cows are injected with rBGH to maximize production, and they burn out after a few years. My father visited a place in California where they had 3000 cows in the herd. They were milking them three times a day, making them stand on concrete.

“At the Farmers’ Market, I try to educate people about this – where do they buy their food? If they buy from small scale producers, they’re supporting farmers who’ve made a commitment to sustainable agriculture, who treat animals humanely.” 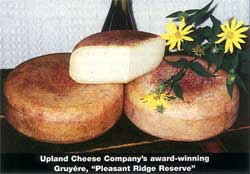 For thousands of years cheese was a highly individualized signature item, different at each farmstead. Modern technology has transformed it into a uniform product suitable for mass marketing. But the 1980s saw a renaissance of small scale cheese making. Today, Wisconsin is one of a handful of states that abounds in cheese offerings like Bleu Mont’s, each a one-of-a-kind treasure lovingly made in limited quantities by conscientious craftspeople who seek a balance between humans, animals, food and the land. What makes their products distinctive varies: some use certified organic milk, some use raw milk, some use the milk of animals other than cows.

At Lovetree Farms in northwestern Wisconsin, Dave and Mary Falk age their raw milk sheep’s cheese in a fresh-air cave they dug themselves, where the wild yeasts of the Northwoods can inoculate the cheese with their unique flavors. Consequently, no cheese in the world is quite like their fruity and nutty Trade Lake Cedar.

Upland Cheese Company near Dodgeville is one of only a few cheese makers that use the milk of their own cows. These cows graze in pastures of thick, soft grasses and wildflowers from early spring through fall, instead of subsisting on barn-fed silage year-round. Their award-winning cheese, Pleasant Ridge Reserve, is available at only a few outlets, including Whole Foods in Madison and a few cheese boutiques in Manhattan.

Many cheese makers favor goats’ milk for its velvety, vanilla-like flavor – and because goats have a lighter impact on the environment than cows. Wisconsin has more goat dairies than any other state.

As the country’s top cheese producer, Wisconsin makes 2 billion pounds of cheese each year, or one-third the national total. It’s nice to know that it’s not all about quantity.